Pittsburgh has become more and more of a “bike city” in recent years. Whether it be bike lanes being added to busy streets (East Carson Street in South Side, East Liberty Boulevard in East Liberty, Beechwood Boulevard in Squirrel Hill), the presence of bike racks in more and more public places or Pittsburgh being named the 35th most bike friendly city in the U.S. in a 2012 list compiled by bicycling.com.

Even with improvements and accolades, there are still areas in the city that are not so bike friendly, which is what I set out to find. 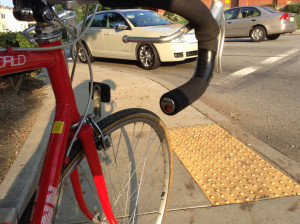 After compiling responses from local bike shops and advocacy group Bike Pittsburgh, I devised a route to ride that would encompass some of the most unsafe areas of the city: starting outside College Hall, I would ride Forbes to Oakland, Fifth through Shady Side, Washington Boulevard (Fifth becomes Washington)to Allegheny River Boulevard and the Highland Park Bridge to Aspinwall. There were more places that I had found, but due to time constraint, I chose a route that I could plausibly ride that involved as many of the places mentioned.

I left from the newsroom around 5:20 p.m., with mostly clear skies and temperatures in the mid-80s. With a McGyver fashioned GoPro around my neck, a 1980 red Schwinn World Traveler and a Gatorade squirt bottle, I set out for my trek during the evening rush hour. Things weren’t as calm I came up Forbes Avenue into Oakland. As I got to level ground, bumper-to-bumper traffic was waiting. I meandered my way through, using the sidewalk to get in between crowded streets only to find the street corners just as crowded by pedestrians. Eventually I made my way to Craig Street and onto Fifth Avenue. The traffic flow was better on Fifth but it gave drivers more opportunity to pass by at increasing speeds. Taking a mistaken turn onto Penn Avenue, I circled back around to get back onto Fifth.

Keeping on Fifth as it became Washington Boulevard, it started to feel more crowded on the road. There was no shoulder and no space between the curb and traffic lane. I continued peddling as fast as possible to keep up with cars as they sped by. Cars were closer to me now than they were at any previous point, increasing my anxiety of sharing the road. It wasn’t until I got onto the Highland Park Bridge that things became most unsafe. 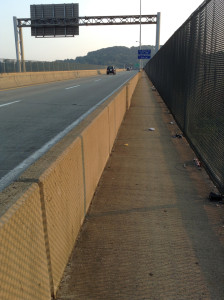 Coming up the ramp to the bridge, there continued to be no shoulder on the bridge there was no physical separation between the walkway and vehicle lane. Seeing the river below increased my stress, and the cars speeding by within a few feet of me only added to that.

After what seemed like an eternity, I stopped at a GetGo in the Waterworks and started the return journey home via Route 8 North through Lawrenceville.

From the ride, I realized that some roads are safer to ride than others. The problem areas come when there is no shoulder on a busy road and especially on bridges, where physical separation between bicyclists and cars seems necessary. If riders can, taking less busy roads is advisable, but sometimes there isn’t an alternative option. Ultimately if riders stay safe, wearing a helmet and use bike lights, and are alert when riding, they prepare themselves for two-wheel travel road. The rest is up to those with four wheels.

November 10, 2016 The Duquesne Duke Features Comments Off on Winter is coming: How to prepare for cold commutes

By Elsa Buehler | Staff Writer It’s about that time of year again. As winter approaches, you can almost hear the groans of 9,500 miserable students wondering why they chose to spend their college years […]

April 23, 2014 The Duquesne Duke Opinions Comments Off on Staff Editorial: Protecting the planet beyond Earth Day

By Duke Staff April 22 was Earth Day, an annual event celebrated around the globe that places an emphasis on the protection of our great planet. Since the ‘70s, it’s been commonplace for individuals to […]

Kaye Burnet | Staff Writer With Halloween behind us and the possibility of freezing rain and snow ahead, one group on campus is affected more than most by the forthcoming precipitation: cycling commuters. According to […]