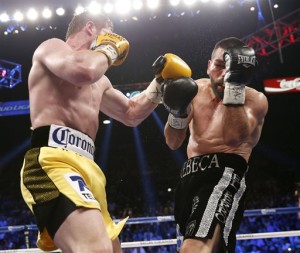 One-sided fights are not always bad fights. What can make them great is a fighter who has amazing skill and talent dominating an opponent. These types of fights allow a fighter to showcase their abilities and prove how great they are. This is exactly what Alvarez needed after the fight with Mayweather.

Alvarez’s biggest concern was t about having a letdown after his monster fight against Floyd Mayweather. He came out focused and ready to impress. He was able to land on Angulo right away. He used his advantage in hand speed to beat Angulo to the punch. Angulo’s plan was to weather the storm early and try to beat Alvarez late. Angulo was fighting off of his back foot, which lessened the impact of his punches. Alvarez was always able to move to Angulo’s off hand and avoid the right. Alvarez was able to avoid punches with good body and head movement. He could see every punch that Angulo threw and block or dodge each of them. Angulo was not able to get any momentum because even when he landed good punches Alvarez came right back. Alvarez has defense that has improved greatly and he appears to be back at the top of his game. The biggest storyline in the fight was whether Alvarez would tire late, but he did not and he was just as effective late as he was early. Angulo was battered and could not avoid taking punishment. Alvarez was able to work at a much faster pace and show that his conditioning was much better. The weaknesses Alvarez had before were much improved. Angulo, who has improved himself, did not seem capable of making an adjustment to Alvarez’s aggression. With over two minutes left in round ten Alvarez landed a clean left uppercut that rocked Angulo. The referee Tony Weeks stepped in immediately and stopped the fight. Angulo was very upset with the stoppage, especially because in his last fight he was fouled and could not continue, but was given a loss because the referee did not see the foul. The stoppage was not done at the right time. There was not a big break in the action it was a single punch and Angulo was clearly still able to defend himself. The time of the stoppage was right because Angulo was beat and he did not have a way to win, but that does not justify a bad stoppage. If the fight was going to be stopped because the fighter was beat up then the doctor or trainer and not the referee should have done it. Angulo was not going to win the fight either by decision or knockout, so it doesn’t matter that much, but it was a bad stoppage.

Santa Cruz does not specialize in power because his volume of punches is outrageous. He is comfortable landing 100 punches a round for 12 rounds, which is unheard of in the professional ranks. Santa Cruz started throwing from the opening bell and never slowed. He was busy every round and his ability to land on a crafty veteran was special. Mijares is a smart fighter, but at this stage of his career he is not the offensive fighter he once was, so after his early trading he stopped landing many punches. Santa Cruz does things that fighters are supposed to like body punching, jabs and combinations. He really doesn’t have knockout power and, especially when he is pacing himself for the full 12, he will not look for the knockout. Santa Cruz got valuable rounds against a good southpaw, but he was never really tested in the fight. Mijares tired quickly, which made the fight slow and lopsided. Santa Cruz was cut in round four from a head clash, but he battled through it and never showed any signs that it bothered him. Santa Cruz ended up throwing over 1,000 punches in the fight and looked dominant throughout.

Linares is a skilled fighter and he has impressive talent, but his problem is when he gets hit he can stray from his game plan. Arakawa has very little power, but he is very tough and he can take punches and keep coming forward better than most fighters. Linares was effective from the outset hitting Arakawa with the jab and working the body well. Linares controlled the pace and moved about the ring with ease. Linares was beating up Arakawa who was tough, but not able to do work against Linares. Arakawa was able to hang in and not get hurt too bad, but Linares was clearly in control. Linares not only out landed Arakawa, he was more efficient with his punches, landing 63 percent of his power punches.

Thomson, who was a last minute replacement, has good power and knew that his best chance to win was to hurt Alvarez. Alvarez would lean in when he threw his punches, which opened him up for Thomson to land. Alvarez did not have the defense to stop Thomson from landing on him. A minute into round three Thomson hit Alvarez with a hard right hook that sent Alvarez into the ropes. The referee called it a knockdown, but Alvarez recovered quickly and made it out of the round. Alvarez was able to land effectively when he worked from the outside, but he would often drift inside and get caught. Thomson had no defense either, which made the fight a battle, but Thomson was landing more of his higher quality punches. Again 20 seconds into round eight Thomson’s right got to Alvarez. Alvarez went down, but bounced right back up and was even able to land some good punches in the rest of the round. Alvarez was not effectively hitting Thomson and he was not protecting himself with defense either. The point of the game is to hit and not be hit and Alvarez was not doing either.

Nugaev was the more powerful fighter and he was the aggressor. Quintero was not afraid to trade punches, knowing Nugaev is a slow starter. Quintero, despite al the disadvantages he faced (visa issues, late arrival to venue and less talent), was able to land good punches on Nugaev. In a strange turn of events Quintero, who was close to an upset, had to quit the fight. At the end of round four Quintero landed a left straight on the forehead that hurt Quintero’s hand. Quintero could not continue and the fight was stopped

Morales was an impressive amateur and he has good so far in the professional ranks. Morales was able to control the action by using the ring well to stay out of danger. Morales had decent defense and a good offensive attack. In the first half a minute of round two Morales land a strong straight right that dropped Suleymanov. He got up but was clearly hurt. With 30 seconds left he was down again. With two minutes left in round five Morales landed a left hook that knocked down Suleymanov for the third time in the fight. He was down twice more in the final round. Suleymanov was not good technically and he made a lot of mistakes that hurt him in the ring. Morales cruised through the final rounds and landed punches at will.

October 12, 2017 The Duquesne Duke Opinions Comments Off on Dear UNAM, what is feminism without women?

By Shivani Gosai | Opinions Editor 10/11/17 The largest university in Mexico, National Autonomous University of Mexico (UNAM) held a conference on the topic of feminism on Oct. 11, which is a wonderful idea except […]