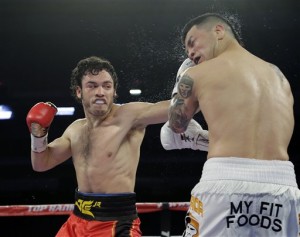 The legacy continues. Julio Cesar Chavez, Jr. was able to avenge a win that many said should have been a loss by beating Brian Vera convincingly. He is now back in the title picture and at 28 with only one loss he is a very strong contender.

This week I have decided to make some format changes that I think will better allow me to talk about the actual talent and abilities of boxers.

This was the second meeting between these two warriors. Chavez won the first matchup, although there was some controversy about the decision. Vera has long played the role of the underdog and this fight was no different. Chavez has an exciting style because he throws lots of punches and because he has such a strong chin he takes lots of punishment in order to land his powerful punches. Many have questioned Chavez and his dedication to the sport. He has certainly been one of the most active fighters in the current title landscape, throughout his career. He has sometimes lacked in his training and has gone through many trainers. He has also had some run-ins with the law including DUIs and drug issues. Overall, though, he is a very talented boxer and he is still on the rise. Chavez was strong early, but Vera started to comeback after he got into the fight. The fighters were both willing to trade and Chavez was getting the better of the exchanges. Chavez allows his opponent to expend all of their energy by circling him and walking to him. Chavez saves his energy and uses it to hurt his opponents. Chavez was winning more rounds and looking better in each round. Vera had several good moments, but he wasn’t doing enough to win the rounds. This fight was certainly not as close as the last one, but it was entertaining throughout. Both fighters were willing to bang until the final bell and the level of competition was rising throughout the fight. Chavez wobbled Vera several times in many rounds. There were several instances of less than sportsman tactics on both sides, but nothing that was very egregious. Vera showed a lot of heart and a strong chin by staying in there and taking a lot of punishment, while still throwing punches.

This fight is ridiculous. I understand how gifted Lomachenko is and how great he was as an amateur, but there is no reason his second fight should be for a world title. He has not earned his place in this fight and there are hundreds of young fighters who are being passed over to fast track Lomachenko. That being said Lomachenko is for real. His hand speed is dazzling and his technical abilities are obviously great. Salido decided not to try to make weight and came in to the weigh-in a few pounds over, which meant he could not retain his title even with a win. Salido came in much, much bigger than Lomachenko. Lomachenko has never gone more than four or five rounds. Salido seemed able to find Lomachenko when he got the opportunity to get inside. Lomachenko was pacing himself early, which allowed Salido to get in some early rounds. Salido was using veteran tactics to make the fight ugly and drag Lomachenko out of his comfort zone. Salido was aggressive and he worked the body well, which was probably something Lomachenko had not experienced. Salido is rugged and while he isn’t a top of the line fighter, who s dazzling to watch, he is an excellent test for Lomachenko and if Lomachenko can’t handle him he probably needs to take a step back and proceed with his career like every other fighter. Lomachenko could not figure out how to win rounds against Salido and he was tiring fast as the fight went on. Lomachenko showed flashes, but he could not do enough consistently for three minutes to win rounds. The best part of the fight for Lomachenko was in round 12 when Lomachenko hit Salido with a good left and it hurt Salido bad, but Salido avoided the danger and maintained his advantage. The commentating for this fight was awful. Obviously Lomachenko is HBO’s pet project, but they were blatantly disrespecting the referee because they had the benefit of replay to see things they thought he should have noticed. They also complained over and over again about Salido’s weight and never really talked about Lomachenko’s inexperience.

Love lunges a bit, but his balance has improved thanks to hard work in the gym. He has always had magical gifts; it has just been a matter of him figuring out how to use all of them. Love was not doing a great job of getting his foot outside, which could be an issue if he fights a southpaw on the world title level. In round three Love cut Biosse with a punch and hurt him badly. Biosse did not go down in the round, but he was badly battered. Love did not appear afraid of Biosse’s punches. Love was cut by a head-butt in the next round, which slowed his momentum. Love was in control, but he needed a statement win and he was not doing enough to accomplish that. The thing that makes a fight like this dangerous is that Love has enough power to hurt Biosse, but not the power to finish him. It is the consistent blows to the head over a long period of time that cause the most damage to a fighter. Biosse was getting outworked and was clearly overmatched. Love was winning every round and doing everything he needed to in order to get the win. With two minutes left in the final round Love cornered Biosse and opened up. The referee stepped in and stopped the fight. The fight was so close to being over, but it is not the referee’s job to decide based on the clock the referee needs to protect the fighter. I think the fight could have continued, but it was not going to change the outcome.

At the beginning of round one Jack was dropped by an overhand right that landed on the ear of Edwards. Edwards followed up immediately and finished the fight with a second knockdown. Jack is a slow starter and Edwards is a fast starter. This created a situation where Jack was not quite ready for the fight, he hadn’t even broken a sweat, and Edwards capitalized. Jack does not have a weak chin, but it was a perfect punch from Edwards. This was a huge upset of a undefeated, talented prospect, who was poised to get a title shot.

Pearson was much bigger as Tyner has never fought at this weight. Pearson had good footwork, which helped the southpaw against Tyner, the right-hander. Pearson was landing good shots and hitting Tyner where he wanted to, but sometimes he would leave himself open and the veteran would capitalize. Pearson worked the body well, which was important for him in this fight because he does not have great power. Pearson was doing the right things like pacing himself and working from the jab. Tyner got into trouble, but he was able to battle through it, which was a good learning experience for Pearson. Pearson handled it well and was patient even when he had an advantage. Tyner hurt Pearson at the end of round six and followed up while Pearson was in the corner causing a knockdown. While Pearson was dominating he was also tiring and Tyner was on a comeback. Pearson did not do enough to win the following round. He was sluggish and he was not throwing enough punches to keep Tyner away. Pearson was pushed in this fight and it was a big step in his development.

Monroe was quick and threw hard punches, although he lacked a bit in volume. Bondas was aggressive and pressured Monroe, trying to get inside. Monroe was a good defensive fighter and he was able to keep Bondas from hitting him. Monroe traded at times and when he did he usually won the transaction. Bondas was able to land more punches and he was the aggressor throughout. Monroe has good technical skills and was able to control the fight and point his way to victory. This was the final fight of the four-fight card that was a tournament. Monroe will be a tough test in the semifinals, unfortunately he, the second best fighter in the tournament, will face the best fighter.

Kopylenko was landing jabs right down the middle with ease. His stiff jab hurt Fort immediately. Fort was unable to defend the punch because he was concerned about the power punches. Fort does not have the best chin and is coming off of a knockout loss. Kopylenko scored a knockdown on the first punch of the second round and only needed a few more to finish the fight. Fort did not know how to set his feet and was off-balance before a punch was thrown thanks to poor technique. Kopylenko looked stiff and didn’t seem to have enough bounce in his step, he also looked slow on his feet and did not look fluid moving around the ring. Kopylenko is probably the favorite in this tournament, but given his age, 30, he may not have a huge future in the sport.

Gatica has an awkward style and he tried to use it to his advantage to jump on Agbeko and surprise him early. This fight was much closer because neither fighter was that talented. Agbeko had a padded record, but he didn’t look like he had been in a tough fight. Gatica was bale to land on Agbeko from the opening bell. Agbeko had no defense and Gatica was willing to take whatever punch he had to in order to land his punches. Agbeko looked exhausted after the second round. Gatica had no defense either, but it didn’t matter because Agbeko had no real power. Gatica will cause some problems for Adams, but should end losing in the next round.

Edouard came out of retirement to take this fight. Adams had less experience than you might expect for his age, 24, because he got a late start and did not have an extensive amateur career. In round two Adams landed some quality shots to the body, which opened up the top. Adams seemed hesitant to get hit, which caused him to jump away and prevented him from putting together quality combinations. He is very raw and will probably pick up his first loss later in this tournament. In the fourth round with over a minute and a half remaining Adams showed a flash of what he can be by landing a strong left hook that caught Edouard as he was throwing. Edouard recovered as you would expect from a veteran and he did not look hurt as the round closed out. After round four Edouard quit on the stool claiming he had nothing left.