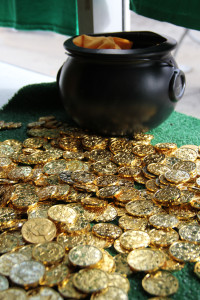 While many students are working towards a state of super hydration this week in preparation for a St. Patrick’s Day pub-crawling extravaganza, Pittsburgh stores are doing a little preparation of their own.

Stores like Common Wealth Press and Blasfome in South Side, as well as The Looney Bin in the Strip District, are trying to cash in on the holiday’s green tradition.

Commonwealth Press, located at 1931 East Carson Street, is offering several different designs for this year’s festivities, all printed on green t-shirts. Slogans such as “Yinz Irish?” or “Pittsburgh: A drinking town with a drinking problem” decorate the shirts. The clothing at Commonwealth Press has a humorous punk-rock attitude, playing off the region’s iconic sports teams and scenery.

Marissa Mack, 23 of Bloomfield, was hired at Common Wealth Press on St. Patrick’s Day exactly one year ago and said most of the clothing designs start out as jokes.

“I think they [the owners] just joke around and turn it into a real thing,” Mack said.

Mack says the stores best sellers are “anything that is humorous or Pittsburgh related.”

Common Wealth Press has already printed 150 green t-shirts to get ready for the holiday. The store is expecting a 125 percent increase in sales on St. Patrick’s Day alone, according to Mack.

In order to set themselves apart from other South Side shops, Commonwealth Press will be offering a one-time only in-store press where customers will be able to customize their own Irish wear anyway they’d like.

Commonwealth Press will be open on Saturday from 11 a.m. to 4 p.m.

Just down the street, Blasfome, located at 1923 E. Carson St., is also seeing green in the upcoming holiday. 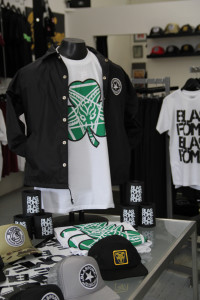 Blasfome has been preparing for St. Patrick’s Day since October. Bartek says the store plans everything six months in advance because it adds structure to the business.

Although the store is typically open from 12 p.m. to 8 p.m. on Saturday. Bartek will be opening the store at 10:30 a.m. to appease the morning parade crowd.

Blasfome will only have one St. Patrick’s Day design available on Saturday, all of which will be displayed on a rack outside of the store.

Bartek believes that displaying the clothes on the sidewalk is the best way to attract customers.

Blasfome’s designs are street inspired and their St. Patrick’s Day design is no different. The “Irish Hate Tee” features the face of a demon created out of a pentagram star resting in the middle of the Pennsylvania keystone. The keystone is placed inside of a large green shamrock and printed on a white t-shirt.

Blasfome only has 30 holiday t-shirts available as of now, but might be getting more depending on demand, according to Bartek.

The store with the largest selection of Irish clothing is The Looney Bin located at the corner of 20th and Penn in the Strip District. Selling Pittsburgh-themed novelty t-shirts, as well as hoodies, socks, scarfs, gloves and other Irish accessories, owner Paul Dausch is cashing in on the festivities.

Dausch said he began preparing for the holiday right after Christmas.

Dausch’s street store showcases 35 t-shirt designs, the majority of which are inspired by the city of Pittsburgh, as well as novelty beads and shot glass necklaces.

Dausch is expecting a large boost in sales over the holiday weekend, but doesn’t think he will bring in the same amount as last year due to colder weather.

“It will probably go down 10 percent,” Dausch said, “but last year was astronomical.”

Although his products may not come at the lowest price, Dausch believes it’s the quality of his products that set his store apart.
“I have the best styles and the best materials,” Dausch said.

For students who are unable to partake in this weekend’s 21 and over activities, but are still looking for something to wear, The Looney Bin has the answer, according the Dausch.

“Only 1/3 of my t-shirts have to do with drinking,” Dausch said.

Many stores are attempting to set themselves apart this St. Patrick’s Day in order to boost sales and profit from those may have had too many green Guinness’ that morning, but when it comes to clothing, they all have one thing in common.

“It’s all about Pittsburgh,” Dausch said. “On St. Patrick’s Day, everyone is Irish.” 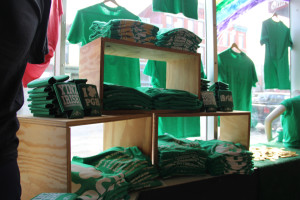 By Joey Mueser | Staff Writer 11/09/2017 Before going anywhere, yes, the name of this band is, in fact, Slaughter Beach, Dog. Not the most catchy name for a band, but its music strikes inspiration […]

David Borne | Staff Writer 02/15/2018 Following the men’s basketball team’s blowout loss to Fordham in the first half of Duquesne’s basketball doubleheader on Feb. 10, it would have been easy for Duquesne fans to […]

By: Zach Brendza | Features Editor  Mumford hiatus Oh how the mighty have … well it isn’t exactly a fall, I suppose? Mumford and Sons have played their last show, “for the forseeable future.” In […]