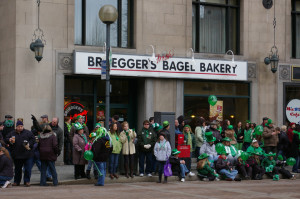 While Pittsburgh claims to have the second biggest St. Patrick’s Day parade in the United States, there was a time before all were marching through Downtown.

“Traditionally, St. Patrick’s Day in Ireland is something comparable to Thanksgiving here in the States,” said the reverend Sean Hogan, vice president of student life.

Hogan, originally from Ireland, described St. Patrick’s Day in his homeland as a “national holiday” and a “rather simple family event.”

Initially, there was no parade for the holiday in Ireland. But that changed in the late ‘60s.

According to Hogan, the story goes in late ‘60s. The police band in Boston (Ireland) wrote to the mayor of Dublin asking to take part in a St. Patrick’s Day Parade and did not get an answer, but they went anyway. They asked for permission but were told that there was no parade when they arrived. But, the mayor of Dublin gave them permission to march through the main drag, O’Connell Street.

“Since then, [there’s been] lots of parades, lots of visitors, fun around the world,” Hogan said.

“It is an Irish parade, per se,” Goodrich said. “It’s a celebration of family and friends.”

This year the second largest St. Patrick’s Day parade in the U.S. will start on Liberty Avenue at 10 a.m., working it’s way to Grant Street, Boulevard of the Allies, until ending at St. Mary’s Church at Stanwix Street. The parade should be over by 2 p.m., according to Goodrich.

This year is also the 20th anniversary of the Blizzard of ’93, when participants marched from the then Civic Arena, down Fifth Avenue to Market Square.

Last year, the parade saw between 250,000 to 300,000 attendees and about 20,000 participants, according to Goodrich, including most notably Vice President Joe Biden.

Costs for the parade, which range from $20,000 to 25,000 per parade, include everything from permits, port-o-johns, extra police security, insurance, as well bands that play the parade.

“[The] Parade costs a lot of money. No one gets paid for this. Act of civil service and love,” Goodrich said.

Fundraising for the parade comes from private and community donations, the biggest source of income for the event,as well as the sale of Parade buttons, which were $30 and included a button, food and drinks at the Parade’s annual Button Party held March 8th at Mitchell’s Restaurant on Ross Street, Downtown.

The Reverend Naos McCool, assistant dean of school formation, has been in Pittsburgh 12 years and has went to every St. Patrick’s Day Parade in that time, but feels “it’s a bit overdone.”

St. Patrick’s Day has multiple meanings, according to McCool. The first and most important is the celebration of the institution of Christianity in Ireland and second, to pay homage to Irish roots.

“[St. Patrick’s Day is] much more of a family day at home, a fun thing …. A holy day of obligation and also a public holiday,” McCool said.

St Patrick’s Day in Ireland this year kicks off “The Gathering” of diaspora of Irish immigrants, set by the President of Ireland, in an effort to have those with Irish roots to return home. “The Gathering” will last the rest of the year, in hopes to boost tourism and connect people to their Irish roots.

McCool described St. Patrick’s Day parade as a “key feature” for celebration in Ireland, as well as going to mass.

To Goodrich, being a part of the parade is being part of a family.

February 14, 2019 The Duquesne Duke Opinions, Staff Editorials Comments Off on Anti-vax movement to blame for outbreak

02/14/2019 By Duke Staff In the age of widespread disinformation and “fake news,” few unenlightened conspiracy theories have been stranger than the rhetoric from the league of “anti-vaxxer” parents on Facebook. Derived from a 1998 […]