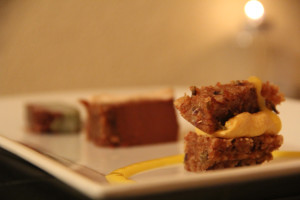 This review has been almost a year in the making, but it has finally happened. This is the true story of two Duke editors who ate a raw vegan restaurant in Shadyside.

Eden, located at the lower level of 735 Copeland St., right off Walnut Street in Shadyside, is truly unique in Pittsburgh, as it is the only raw vegan restaurant in or around the city, at least to my knowledge. But things finally worked out this time, as I usually try in fleeting efforts to review Eden on Tuesday, the absolute last day I could do a review for each week’s publication, but alas they are closed on Tuesdays. Planning, right?

So on a rainy Monday we set out, friendly reliable editor, or F.R.E.D., and myself, on any 71 bus that would take us through the Pittsburgh weather to the garden.

Upon arriving at around 5:20, we were the first customers to Eden (they open at 5 p.m. on weekdays.) We were seated and presented menus. And then the deliberation began. This may have been the most confused I have ever been reading through a menu.

Eden’s menu, which is all vegan and gluten free minus the “Immunuty Booster” smoothie which has bee pollen, is much like traveling to a different country, everything looks great, but you have no idea what things are. I hope that made sense? The “Start” portion (appetizers) includes vegetable nori roll and a cashew “cheese” plate. The raw “Main” (entrées) include fennel, shitake, and asparagus stew and sea pizza. The not raw “Main” includes peanut kale, red curried stew, a Mexican burrito bowl. “End” (raw desserts) feature chocolate pecan pie, avocado ice cream cake, lavender and almond cake. They also offer smoothies, juices and juice shots.

We’re not on campus anymore, Dorothy.

As myself and F.R.E.D. stared eternally confused at the menu, our server Barbie asked if we had any questions. We did. We didn’t know what to do. She recommended the sampler, where you get to try a small portion of almost everything on the menu; three courses that feature three starts (appetizers), three raw mains (entrees) and three ends (desserts) for $15. 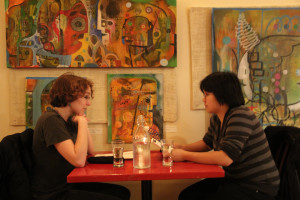 Yeah, let’s go with that. For your sake and mine, it was the best choice we could have made. Less decisions for us (woo) and a thorough sampling of a menu that seemed to be in a different tongue with some of the items listed (what’s is sea pizza, seriously?)

Mentally, physically, maybe even emotionally, we prepared for a three course raw vegan meal. Buckle up, kids. It’s a hell of a ride.

The around 40 capacity restaurant is a comforting place to be. The walls are line with local art, this month featuring the work of Gabe Felice. Beach House’s Teen Dream album was playing throughout our meal. It’s location also, off Walnut Street nestled down a set of stairs on Copeland Street gives the sense of it being “away from it all,” “in its own world” even, if we’re getting cliché.

First came the starts, we were given the acorn squash soup (chilled and blended with ginger, lemon orange and drizzled honey), cashew cheese plate (brie-like cashew cheese served with kumquat marmalade, carrot flax crackers and cucumber) and coconut noodles with honeydew and miso (shaved coconut, zucchini and parsnip served over chilled honeydew and miso soup, garnished with ginger and Thai chili). The soup was my favorite, it was refreshing and tasted and looked like a dense smoothie, while all were enjoyable in their own right. F.R.E.D.’s favorite was the cashew cheese plate, as he thought the “cheese” mixed with the marmalade was unique and the overall taste of the place was refreshing and light.

Second course were the raw mains, portobello steak (sliced marinated portobello steaks served over spinach and riced cauliflower and broccoli in an avocado and sunflower cream), fennel shiitake and asparagus stew (with brazil nut, coconut, parsnip and carrot puree) and sea pizza (carrot and flax crust with green pea and sunflower cream, wakame seaweed and cucumber). The portobello steak was my favorite, the marinated portobello was delicious, seasoned and marinated well and the riced cauliflower and broccoli in the avocado/sunflower cream was an unreal combination, strangely having the consistency of chicken salad (but it’s vegan!). F.R.E.D. enjoyed the stew most, which he thought was creamy, with a “fun” texture and had a “spring” taste.

The third and final course were the ends, which included chocolate pecan pie (cacao ganache with pecan crust and vanilla walnut cream), lavender and almond cake (with lemon cream and mango puree) and avocado ice cream cake (avocado, lime and ginger ice cream with sunflower and cacao crust and cacao and ginger sauce). It was unanimous. The chocolate pecan pie was the best. The pie had the consistency of fudge and was oh so rich. I really feel that the best vegan dishes are desserts. It just works. Like science. Or magic. Or some other witch craft I don’t understand. 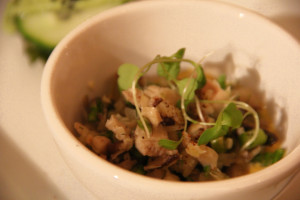 Our bill each came to $16.09, after trying nine petite-portioned menu items. Eden was an experience I would have countless times again. Yes, it was different. But it was delicious. Be warned though: Eden isn’t for the faint of heart. Rather, those who don’t like to try new things. If that’s you, just stay here on the bubble that is the Bluff. 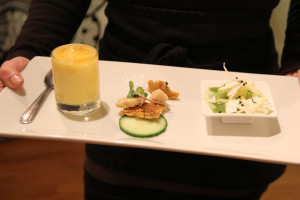 By: Zach Brendza | Features Editor In Pittsburgh, you can get just about any cuisine that comes to mind. Even strict herbivore can satisfy their hunger with everything from vegan cheesesteak to vegan ice cream. […]

Hallie Lauer | Layout Editor 11/07/17 The Hogan Dining Center, better known to most Duquesne students as simply “Towers,” has earned the Live Well Allegheny Restaurant Distinction. This distinction is not just an award for […]

April 23, 2014 The Duquesne Duke Features Comments Off on Featuring the city: What’s cool in the ‘Burgh

By: Zach Brendza | Features Editor Over the past three years, I’ve had the pleasure of being your Features editor. Throughout my tenure, I’ve experienced a lot of cool things and covered interesting stories for […]