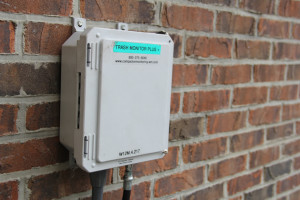 In a city once known for its steel mills and grey skies, Duquesne is attempting reduce its footprint and make the Bluff less polluted.

Duquesne installed Compact Monitoring Systems (CMS) to the four trash compactors on campus last August. The Public Safety Building, Towers, Brottier Hall and the Student Union all have waste compactors that use a hydraulic ram to compress trash together to reduce its volume, according to Bill Zilcosky, director of building services, ground and operations for the Department of Facilities Management.

Before the installation of CMS sensors, compactors would become overfilled at times or emptied before the unit would reach full capacity. This caused erratic and infrequent trips from Waste Management to the University that were not always necessary.

The new CMS hardware monitors the pressure of the ram and compacted waste to more accurately tell when the unit is full. The units are small and have been installed next to the waste units and come equipped with sensors to register the force needed for compacting.

Zilcosky said the University has had close to a 25 percent drop in the amount of visits Waste Management has had to make to campus compared to previous years.

By decreasing the number of trips WM makes each month, the monitors also reduce carbon-dioxide emissions from the trucks transporting the trash themselves. According to Waste Management, reducing one haul per month over a year’s span will reduce CO2 emissions by one ton.

Zilcosky said the sensors have made measuring and hauling away the trash more efficient.

“We’re sending out fewer boxes and making fewer trips,” Zilcosky said in relation to the amount of trash being hauled away.

Facilities Management Supervisor, Coleman Griffin said it has significantly reduced the frequency in which Waste Management has to come to the University. Fewer visits also mean less traffic from dump trucks that restrict movement on campus said Griffin.

In the past, the process of replacing and removing the compactor receptacles could take at least 15 minutes per unit, Zilcosky said. Not only do these compactors reduce waste and save time, Duquesne is also saving money.

Waste Management installed the devices at no cost to the University in August when Duquesne contracted the company to manage the trash. When Duquesne opened a bidding contract to haul its waste, WM was able to underbid its competitors by offering to install the CMS for free and make fewer trips.

Caption: Duquesne installed Compact Monitoring Systems to four trash compactors on campus last August. The monitors have saved the University up to 50 percent of hauling costs from West Management.

Liza Zulick | Staff Writer Duquesne University celebrated the fifteenth annual celebration of Darwin Day, to discuss the scientific events that have come from Darwin’s original theory. On Feb. 21 at 7 p.m. in the […]

February 14, 2019 The Duquesne Duke Opinions, Staff Editorials Comments Off on Anti-vax movement to blame for outbreak

02/14/2019 By Duke Staff In the age of widespread disinformation and “fake news,” few unenlightened conspiracy theories have been stranger than the rhetoric from the league of “anti-vaxxer” parents on Facebook. Derived from a 1998 […]

By Carolyn Conte | The Duquesne Duke A close look at on-campus dining prices reveals that Duquesne’s commuters overpay for university meal plans. The results show it would be cheaper to pay for campus food […]