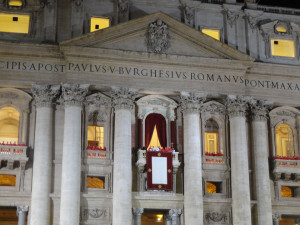 A white puff of smoke from the Sistine Chapel Wednesday signaled that the Catholic Cardinals who gathered in Vatican City selected the new pope, Jorge Mario Bergoglio.

Begoglio, who will be called Francis, will become the Catholic Church’s 226th pontiff and the first non-European to hold the position in more than 1,200 years. Francis, 76, served as archbishop of Buenos Aires.

Speaking to thousands of rain-soaked admirers from the balcony at St. Peter’s Basilica, Francis said in Italian for the audience to “pray for me, and we’ll see each other soon.”

“I would like to thank you for your embrace,” Francis said. “My brother cardinals have chosen one who is from far away, but here I am.”

“As a champion of the poor and the most vulnerable among us, he carries forth the message of love and compassion that has inspired the world for more than two thousand years — that in each other we see the face of God,” Obama said in a message released by the White House.

Photo by Sarah Diehl | For the Duquesne Duke

Caption: Jorge Mario Bergoglio, now know as Pope Francis, is introduced to Catholic faithful on Wednesday in Vatican City. Francis, who is from Argentina, is the first non-European pontiff in 1,200 years. He has taken over for Benedict XVI, who resigned from the position last month, and is the Church’s 226th pope. Prior to being selected pope, Francis served as archbishop of Buenos Aires. See story on page 3.

By Duke Staff As President Obama delivered his fifth State of the Union last Tuesday, members of the audience applauded nearly after every topic. While it seemed like a successful evening, a closer inspection of […]

By Duke Staff No matter which way you ingest your news, the fact remains that 13 people were shot dead, eight injured on Monday morning in Washington’s Navy Yard. The story of Aaron Alexis, the […]

September 11, 2014 The Duquesne Duke Opinions Comments Off on ISIS leads to questions about safety in America

By Pat Higgins | Sports Editor Thirteen years later, are we safer? According to a national survey conducted by the Pew Research Center and USA Today last month, 65 percent of adults say the world is […]