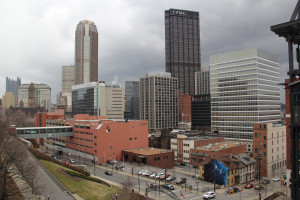 By Anthony Meier | The Duquesne Duke

According to Susan Tymoczko, Pittsburgh Zoning Administrator, the master plan is a document submitted to the city that lays out the agenda on campus growth pertaining to topics such as University renovations and expansion.

For Duquesne, the process being taken upon by the University and the CEC to update property records deals specifically with lot consolidation.

Rod Dobish, executive director of facilities management, said Duquesne’s property lines consist of lots and within the lots are blocks. Since the building of Canevin Hall in 1911, not all of the University’s buildings that have been constructed conformed to Pittsburgh’s latest zoning codes.

Tymoczko said while lot consolidation isn’t a required part of a master plan, cleaning up property lines can be beneficial when it comes to the University wanting to make any sort of renovation or expansion.

The most recent example of lot consolidation being beneficial was the construction of Des Places Hall due to the dormitory originally being built upon two lots, said Dobish.

“[Consolidation] cleans up construction that has happened on campus since 1911, while helping to straighten up city and county records,” Dobish said.

Tymoczko agreed. She said Pittsburgh had not always required new construction to fit to the current zoning codes until the past couple of years, which explains Duquesne’s recent effort to consolidate the lots of the entire campus.

Dobish said the consolidation process began as a “piecemeal effort” around 2007 with smaller efforts being put in from time to time. He said it wasn’t until the construction of the Power Center and later Des Places that the University decided to take a look at the entire campus.

Civil & Environmental Consultants, a consulting service that specializes in environmental services and civil and site development engineering among other things, was tasked to do the smaller jobs on campus prior to helping out on the complete consolidation project, according to project manager Evan Baker.

Baker said the “research effort has been very significant” for the project.

He added the “field work,” or surveying, is complete and the CEC is in the process of making drafts for Duquesne to review.

“We are processing the data [from the field work] to generate plans for Rod’s review,” Baker said.

The finalized plans are still not close to being complete, according to Dobish. Once the first draft is completed, the University will review the draft and pass it onto the City Planning and Council for approval.

Dobish described the process as “tedious,” as Duquesne has well over “100 lots and blocks” to map and does not expect a final map to be completed for another couple years. But he said the lengthy timeline should not be viewed as a negative because the newly mapped plan will give the University plenty flexibility when it comes to making any potential changes in the coming years.

“[The research] gives us all kinds of other data that can be used towards minor renovations,” Dobish said.

Caption: Facilities Management is working to update University property records in accordance with the University’s master plan. The master plan was submitted to Pittsburgh and addressed the agenda on campus growth.

Capri & Rio Scarcelli | a&e editor and staff writer Sept. 16, 2021 To commemorate the time lost with quarantining and social-distancing, Pittsburgh Irish folk were more than ready to start anew with a “half-way […]

Seeing the Bucs is a treasured steal

April 11, 2013 The Duquesne Duke Opinions Comments Off on Seeing the Bucs is a treasured steal

11/15/2018 By Ollie Gratzinger | Opinions Editor  The halls are decked, the stockings are hung, the mochas are minty and it isn’t even Thanksgiving yet. ‘Tis the season, I suppose, but every year, the season […]