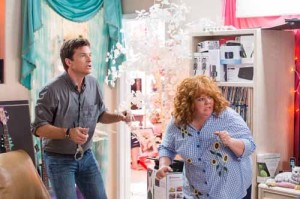 By Adam Kelly | For The Duquesne Duke

To be honest, expectations were mediocre at best before seeing Identity Thief. The film left me pleasantly surprised and wildly entertained.

This is due in large part to Melissa McCarthy’s performance. While Jason Bateman is a very good actor, he seems to play the same role of good-guy businessman that lets people push him around every time he’s on screen (Arrested Development, Horrible Bosses), and Identity Thief would appear to be no exception. The movie seemed destined to be like any other comedy of the past three years. However, I made a crucial mistake in not taking McCarthy’s character into account.

The film opens with mild-mannered businessman Sandy Patterson (Bateman) on the phone with a woman (McCarthy) who tricks him into giving away his personal information. She then uses Sandy’s information as her own in order to purchase anything her heart desires, from alcohol to a Fiat and everything in between. The real Sandy Patterson must travel to Florida and bring her back to his hometown of Denver in order to prevent his entire life from falling apart. Along the way, the two Sandy Pattersons face several entertaining misadventures.

The big draw of this movie is McCarthy, who is known best for her hilarious role of Megan in the film Bridesmaids. While Bridesmaids may have put McCarthy on the map, Identity Thief is her breakthrough performance into stardom.

The McCarthy’s outrageous humor contrasted with the serious role Bateman plays makes this film worth seeing, especially if you are in need of a good laugh. McCarthy’s role can be best compared to a modern day female version of Chris Farley. The humor is so crude and outrageous that I applaud McCarthy simply for keeping a straight face throughout the scenes. She definitely does her part in earning the film its “R” rating.

I was correct in assuming that Bateman would play the same role he always seems to play. The beginning is nearly identical to Horrible Bosses, as he is a businessman that is good at what he does, yet is unappreciated by his boss. Bateman does have his funny moments, which caught me off guard having spent most of the movie laughing at McCarthy’s character.

The soundtrack of the movie lends itself to the humorous nature of the film. Most of the musical pieces are played while the characters are driving. McCarthy’s character does her own renditions of the songs in the most hysterical way possible. The songs include “Hustlin’” by Rick Ross, “Barracuda” by Heart, and “Milkshake” by Kelis. If you’re familiar with McCarthy’s brand of humor, you can imagine just how funny it is watching her sing these songs while driving Bateman’s character crazy.

Speaking of music, the film’s cast features rapper Tip “T.I.” Harris. Harris is known for his music, of course, but while his music career seems to be dwindling, he is establishing himself as an actor. In Identity Thief, he plays one of the antagonists trying to hunt down the woman claiming to be Sandy Patterson. While he doesn’t have a major role like he does in ATL (2006) or Takers (2010), he has proven to be multi-talented in the entertainment industry.

Identity Thief is an entertaining film with a solid cast. While the movie isn’t unforgettable, it is definitely worth seeing due to the role of McCarthy. If this film does have any kind of lasting legacy, it will be the coming out party for McCarthy as a premier comedy actress.

By Loren Smith | Staff Writer The most fan-centered award show on television made its 43rd appearance last Wednesday, when CBS broadcast the People’s Choice Awards live from Los Angeles. Hosted by comedian and actor […]

Sean Armstrong | Staff Writer 04/19/2018 Hip-hop has evolved significantly in its short lifetime, from the classic cyphers to the East Coast-West Coast war that dominated the ’90s to the global phenomenon that it is […]