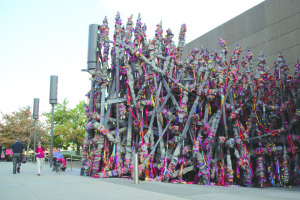 What: An internationally known, massive exhibit

Where: Carnegie Museum of Art

The “preeminent exhibition of new international art in the United States” returns after its last run in 2008-2009. The International, started in 1896, takes place every four years. 2013’s edition focuses on new voices rooted in history, and sense of place and play. The exhibit is structured in four new installations: the international art, a playground and reinstallation of the museum’s modern and contemporary art collection.

The exhibit’s international art portion features 35 artists from 19 countries, with some new commissions. While the artists come from different parts of the world, their works have a mass appeal and can be widely understood.

The Lozziwurm, the play structure designed by Swiss artist Ivan Pestalozzi, explores the history of postwar playground design and incorporates playgrounds from Europe, the United States and Japan from the 20th century.

The collection will contain more than 200 piece of art, including paintings, black and white photographs, a film series in the galleries, an International archival display and more.

What: Performances, visual art, and a 40 foot inflatable duck

Florentijn Hofman’s Rubber Duck kicked off the festivities last Friday. The rest of festival is split into seven performances and four visual art exhibits, with artists hailing from The Netherlands, Nova Scotia, Quebec, Belgium, Australia and Switzerland, at this month-long festival.

The performances are highlighted by Perth Dance Company’s (Australia) It’s Dark Outside and 2b theatre company’s (Nova Scotia) The God That Comes.

It’s Dark Outside is a grand epic Western about redemption and dementia that was inspired by Alzheimer’s and Sundowner’s Syndrome. The show also incorporates puppetry, masks and animation into the performance. The God That Comes follows the story of Bacchus, Greco-Roman god of wine, from Euripides’ The Bacchae, an ancient Greek tragedy, where the poor enter a spiritual revolution with wine, ritual madness and ecstasy. This performance contains strong language.

Tickets to all performances are $25.

The Festical of Firsts visual art installations, Hive and Zee. were created by Austrian artist Kurt Hentschlager. Granular Synthesis: Model 5 & POL, also visual art installations, were created by Hentschlager and Ulf Langheinrich. The interactive exhibits incorporate light, sound and other elements. Zee has been temporarily closed, due to participants reportedly having seizures.

All visual art exhibits are free.

The annual Pittsburgh festival, now in its fourth year, showcases over 30 audio and 10 visual artists, as well as film screenings, performances and workshops. Artists in the festival are from Bulgaria, United States, United Kingdom, France and Germany.

U.S. Girls of Canada and Sharon Needles highlight the audio (music) lineup. U.S. Girls is a one woman project, merging experimental compositions with sounds clips. Sharon Needles is an American drag performer.
LaTurbo, Avendon, a visual artist, is an artist render avatar who exists on the internet. Avendon’s work has geometric and architectural qualities,
twohundredfiftysixcolors is a feature length film made of 3,000 animated ,gifs. The .gifs feature Barak Obama, Lindsay Lohan, David Hasselhoff and more,

Events are individually priced except for showcases which are free. Weekend passes can be purchased for $60 for VIA festival and $100 for a VIA weekend pass and Carnegie International events, which includes Opening Night Event and weekend admission to the museum.

Age restrictions are set by venues and range from all ages to 21+.

By: Marlee Ebbert | For The Duquesne Duke Pittsburgh will welcome a temporary tenant Friday: a forty foot tall rubber duck. This giant floating bird has appeared in many cities across the globe such as […]