By: Michael Lynch | The Duquesne Duke 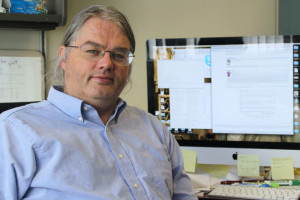 Patrick Juola had a fairly typical summer—soaking up some sun at the Jersey Shore, sightseeing in Chicago, exposing J.K. Rowling to be the true author behind a little-known crime novel.

The book, entitled, “The Cuckoo’s Calling” was released in April; receiving great reviews, but lackluster sales.

After receiving an anonymous tip suggesting the novel’s mysterious author, Robert Galbraith, was actually the mind behind the Harry Potter series, London’s “Sunday Times” reached out to Juola in an attempt to confirm the suspicion.

Using computer software he’s been developing for the last several years, Juola was able to match the novel to Rowling in just 30 minutes.

The software, created by Juola for the Evaluating Variations in Language Lab at Duquesne, looks at usage and speech patterns to determine a work’s authorship. Juola ran four separate experiments comparing the writing style of “The Cuckoo’s Calling” to Rowling’s 2012 novel “The Casual Vacancy”. All experiments pointed to Rowling.

She confirmed herself to be Robert Galbraith on July 15.

Juola said he did receive some backlash for cracking the case.

“Rowling herself was not happy about it,” he said. “She had wanted to publish it secretly because she’s not into the money as far as I can tell. She’s into being a good writer and she wanted to be able to get feedback.”

“I hoped to keep this secret a little longer, because being Robert Galbraith has been such a liberating experience,” Rowling said in a statement released on her website. “It has been wonderful to publish without hype or expectation…”

Juola said the technology can also be used as a form of internet security and can monitor cheating and plagiarism.

Associate professor John Kern said Juola’s “three-discipline skill set” in computer science, mathematics and statistics make him one of the most well-rounded professors in the department.

“Part of his success stems from his ability to effectively apply knowledge from these three areas in a computational linguistics setting,” Kern said in a written statement. “Conversation with Dr. Juola reveals his colorful, quick wit, which translates into engaging and often entertaining student lectures.”

Computers and programing first sparked Juola’s interest when he was 11-years-old. His father, a mathematics professor at Boise State University, enrolled him in a computer programming class for elementary school students just as computers were becoming popular. It was at that point that Juola was “bitten by the bug.”

“Whatever you can imagine, you can get the computer to do. If you have a strong imagination, as I do, it’s a very powerful medium for expressing yourself,” he said, pointing to his childhood interest in fantasy novels as a catalyst for his creativity.

Juola continued to program computers through high school and into college. Graduating from The Johns Hopkins University in 1987 with a degree in electrical engineering and mathematics, Juola spent two years working as a computer programmer before going on to receive his MS and Ph.D in computer science from the University of Colorado at Boulder.

Juola enjoyed the constant moves, saying, “Boise is a great place to be from. It’s kind of a boring spot to be if you’re 19-years-old and want to get into trouble.”

Juola ended his education at Oxford in England where he did two years of post-doctorate work and played classical viola with the Oxford Symphony Orchestra.

While computer science has always been his strong suit, Juola said it wasn’t until his time in England that he became fascinated with nuances of linguistics.

“I got interested in the psychology of language and I started working on the relationships between person and the language that person produces and the notion of linguistic similarity,” he said.
Juola’s friend and colleague, Patrick Brennan said the professor has always had a way with words.

“…He has always been a steadfast and earnest supporter of those around him,” Brennan said, “and his quick wit and knack for storytelling; he is a natural raconteur…”

Juola is currently working on a long-term project entitled, “Is That You, Mr. Lincoln?” in an effort to collect and authenticate all the writings of Abraham Lincoln in his lifetime. Juola is in the process of analyzing Illinois newspapers.

Raymond Arke | Editor-in-chief 09/13/2018 The nationwide hunt has been on for the anonymous Trump administration official who wrote the Sept. 5 New York Times anonymous op-ed critical of the president. One Duquesne professor, with […]

By Brandon Addeo | The Duquesne Duke After discovering that famed author J.K. Rowling wrote a book under a pseudonym, Duquesne computer science professor Patrick Juola continues to innovate with help from a $25,000 grant. […]