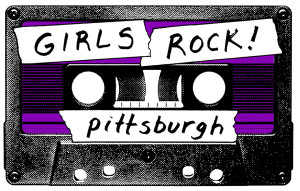 Music is a powerful tool. It influences society’s opinions and beliefs and can be used to change the world.

Vanessa Veltre, one of the co-organizers for the local Girls Rock! program, explained that there are over 50 Girls Rock! camps around the world, with Pittsburgh’s inaugural camp being held in 2013.

Each camper is put into a band, where the band members work together to create a name and logo, screen print t-shirts, learn the instruments and write a song that is performed at a showcase at the end of the camp. The bands also record the song that they wrote, which is compiled onto a CD for the campers to remember their experience.

Jodi Morrison, one of the coordinators on fundraising, operations, marketing and gear committees for Girls Rock! Pittsburgh, volunteered with one of the Girls Rock! camps in Brooklyn. When she came back home to Pittsburgh and saw that the program was coming, she had to get involved because she loved how transformative the experience is. She explains that they remove the idea of perfection to allow the girls to experiment and explore the various aspects of the musical process.

“Many come in on Monday morning so timid and trying so hard to be perfect in actions, thoughts and appearance. They desperately want to fit in and so they act how they think, or were told, they should. On Friday, after a week of being accepted for who they are, listened to, challenged and after realizing that what they have to offer has value, they become jaw-droppingly confident, opinionated, powerful individuals. It’s awe-inspiring,” Morrison said.

Madeleine Campbell, a Duquesne music school alumni who graduated this past December, is the gear and equipment coordinator as well as a programming coordinator for Girls Rock! Pittsburgh. Having been familiar with the Girls Rock! program when she lived in North Carolina, Campbell jumped at the opportunity when she saw the call for volunteers in the Pittsburgh area. What began as a one-day offer to help record the Girls Rock! CD turned into Campbell becoming involved in multiple aspects of the camp.

“I think Girls Rock! is a really important organization because there’s not as much discussion in the music industry for women in terms of running shows, running venues, you know, women aren’t as visible in music,” Campbell said.

“We wanted to have an event that was fun for the girls so an hour before the movie screening we had the instruments set up that the girls were able to rock out on a little bit. Some of them were able to play their songs from the camp and some experimented on instruments they never played before, which was a lot of fun,” Veltre said.

This past Sunday, the Girls Rock! Program came together for 2013 Girls Rock! Pittsburgh CD Release Party. The CD, which was professionally edited and mastered at Treelady studios in Pittsburgh, gave the campers the full experience of being an artist in the music industry. The CD also became available this past Tuesday on Bandcamp for $3.

Along with the CD Release, the event offered a screening of the Girls Rock! documentary, which covers the original Girls Rock! program in Portland, Ore.

“It’s a really cool way for people who don’t know much about us to get a 90-minute dose of what we do throughout the week. It chronicles the camp in Portland and follows the stories of four girls and shares their experiences and everything they learned,” Veltre said.

Despite the heavy focus on the different aspects of the music industry, Campbell explains that the true purpose of the camp has nothing to do with music.

“Music is our vehicle but music is not the point of camp. If these girls walk away from camp and never touch an instrument again that’s totally fine. We want them to know that they have the power to do it and they can do whatever they want and that their ideas and opinions are valuable. Music is just a vehicle that we use to help them realize the power of their own voice.”

Why Sanders, Trump will be lead candidates

September 24, 2015 The Duquesne Duke Opinions Comments Off on Why Sanders, Trump will be lead candidates

By Michael Williams | Student Columnist There is too much money in politics. Well, at least 84 percent of Americans believe so according to the New York Times. These days when politicians are walking advertisements […]

Boost given to MBB by heavy turnout not enough vs. SBU

February 8, 2018 The Duquesne Duke Columns, Men's Basketball, Sports Comments Off on Boost given to MBB by heavy turnout not enough vs. SBU

09/17/20 Capri Scarcelli | Arts & Entertainment Editor Enjoying sporting events has become increasingly difficult with the onset of the pandemic, though Duquesne students have gotten creative with how they will go about cheering on […]