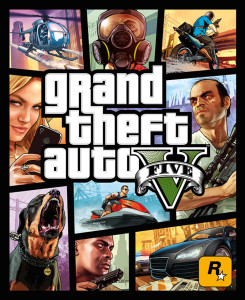 When it was announced that Rockstar games intended to make the latest installment of the Grand Theft Auto series centered around three main characters, fans were skeptical. Then it’s release was delayed 4 months.

GTA V made $1 billion in three days, the fastest entertainment release to get to that level in history, according to Forbes. It is available now for PS3 and Xbox 360.

Grand Theft Auto V focuses on three main characters, Michael, Franklin and Trevor. The player starts as Michael, a white 40-something family man who worked hard to get out of his troubled past and is determined to enjoy his retirement. His plan for retirement was to help the FIB, a mock version of the FBI, and apprehend the other members of his crew. The player rejoins him 10 years later poolside, outside his mansion in modern day Los Santos, a spoof on Los Angeles.

The gamer is then introduced to Franklin who is “repossessing” cars for a shady car dealer. Franklin has lived a difficult life between not having parents and turning to the streets to find a family. He has backed himself into a corner, but he want to get out. He happens upon Michael and they quickly become friends. Michael sees Franklin as a protégé. When Michael finds himself in major debt, he jumps back into the heist game with the help of Franklin.

Trevor is the final main character. He is a meth addict who lives in a trailer and appears to have nothing to do with the storyline, but it is later revealed that Trevor and Michael go way back.

The use of three main characters is carefully integrated into the game-play. By the time the player needs it on a mission, they are already very comfortable with the mechanic. Each character has a unique skill (Franklin can drive well, Michael is a sharpshooter and Trevor can take an insane amount of bullets without loosing health) that allows them to flourish in certain situations, which is why they end up working as a team to pull off some the games crazy scenarios.

While completing missions you will often have the choice of handling the situation from any of the three vantage points, but be careful if you leave one of them exposed without giving him cover fire he will die, even if you are not controlling him. When not on a mission you can explore the gigantic open world that is Los Santos with any of the characters and switch between them as you please. One of the biggest takeaways from the game was that the characters were not predictable.

Grand Theft Auto V is what the fans have come to expect from the series but updated with new technologies. The star of the game is the map. The claim that it is as big as previous three installments combined is definitely true.

The mechanics of walking in and out of doors is made much easier as it is now a smooth motion, and gone are the days of cut-scenes or black screens.

The side missions as always shine through and give the game an unbelievable re-playability. The situations range from giving a businessman a ride to the airport after his rental car breaks down to an all out gunfight with a gang who robbed a hair salon.

One huge bright spot is that none of the characters can look the same, even if they go to the same clothing store, tattoo shop or barbershop. When the payer takes the character to buy

February 13, 2020 The Duquesne Duke Opinions Comments Off on Lessons from a gamer: the danger of violence in video games

2/13/20 Timothy Rush | Staff Columnist Grand Theft Auto V is the third best selling video game in history (only being bested) by Tetris and Minecraft. Unlike its fellow top 3, the Grand Theft Auto […]

February 22, 2018 The Duquesne Duke Arts & Entertainment Comments Off on If we want progress, stop scapegoating gaming

By Grant Stoner | Staff Writer 02/22/2018 Last Wednesday, high school students and faculty members became the victims of yet another mass shooting, this time in Parkland, Florida. A 19-year-old gunman ended the lives of […]