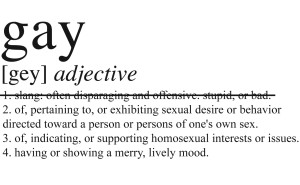 I was not always conscious of my language use. As I became more in love with writing, I developed an appreciation for the communication that language makes possible.

I decided a while ago that I would try to cut out all offensive and alienating terms in my vocabulary — even ones that are not most obvious. I found that, even though I always tried to be considerate toward others, my language could be tightened up to help meet that goal.

Language use is a huge factor in shaping society and interactions. It’s certainly not as easy as I would like to think — sometimes we don’t know we’re alienating or offending a group. This visibility is possibly most clouded when such language is used with joking or pop culture—if it’s not serious it’s not offensive, right? Mass popularity has a similar function as humor does.

The fact that offensive words are used at all facilitates alienation. Without the usage of them, verbal abuse would suffer along with social stratification, which is also dependent on language. We often express that someone is something and that someone is not something.

Among many problematic terms, I consistently come across one that troubles me: gay. Of course, this is only one example in a sea of words that cause controversy. People now use “gay” to describe things they think are stupid, unfair and lame. For example, “My mom won’t let me sleepover. That’s so gay,” or “That shirt is so gay.” We are all familiar with this form of usage because it seemed to materialize while we were in middle school and high school and it has continued on since then.

I hear it now and I have even heard it used that way by adults. In fact, I used to use it myself — as another kid having been conditioned by my environment and mindlessly going along with popular culture. All it takes is a little self-reflection and independent thinking to break out of these zombie states and remove such offensive words from common vocabulary.

The reason why I chose this word as my main example is because it has picked up extra meanings in history before. Despite meaning “lame” to some young people today, it is also used widely to describe femininity — specifically, femininity that appears in the male realm. This is logically and linguistically incorrect as well. Something classically feminine that finds itself in a masculine space should not be labeled as “gay.”

Before the word began to be used to describe a feminine person or was used by teens to express disdain, it was simply another word.

Actually, it didn’t originally mean homosexual, either. The original meaning of the word was “carefree” or “happy.” Only around the 1600s did it gain homosexual meaning in addition to referring to the sexually promiscuous. The transition the word has undergone has changed it from a harmless adjective which held positive emotion, to a word with a lot of staying power that can be insulting to a certain demographic.

True consciousness is a step further than knowing a word is offensive, in realizing that such usage simply does not make sense. Even better, realizing that such usage is not effective or constructive to human communication and how we interact with one another is helpful to change word choices. Effective and helpful communication should be the main goal in this reevaluation of one’s words. That kind of deconstruction can be beneficial even beyond language use and thought processes in general.

After pondering the misuse of the word “gay,” I became aware of all the words I used and heard used incorrectly. Even if they aren’t radically offensive in some way, there is still a problem with misusing particular words. Mainly, the problems are misunderstandings and confusions in communication. If someone is expecting a lion but gets a sheep in lion’s fur, whatever job the lion was supposed to do surely won’t get done and vice-versa. Sometimes we dress situations in the wrong words and meanings get mixed up and affect actions.

Of course, language is changing in so many different directions and with such force that it becomes difficult to pay attention. Popular culture and the media in particular, have a massive influence. Television shows, movies, music, and the Internet have all popularized words and phrases for the good, the funny, and the bad. The content the media puts out to the masses and makes visible to a young, malleable audience may forever be controversial. The key to independent and careful thinking is an aware and self-conscious human.

03/28/2019 By Ollie Gratzinger | Opinions Editor It turns out that your spicy chicken sandwich still comes with a side of homophobia: In a less-than-shocking report by ThinkProgress, it was revealed that Chick-fil-A has continued […]

By Julian Routh | News Editor On the fifth floor of the City-County Building on Grant Street, within feet of Mayor Bill Peduto’s office, the most diverse Pittsburgh City Council in the city’s history operates. […]

10/04/2018 By Ollie Gratzinger | Opinions Editor “Get married, or get out.” That’s the gist of a new Trump-era visa policy, which will target the same-sex partners of foreign diplomats of U.S.-based international organizations like […]