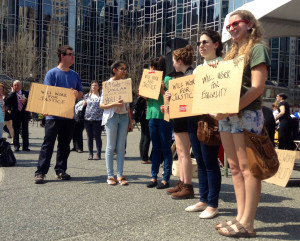 By Victor Essel | The Duquesne Duke

Supporters gathered in Market Square on Tuesday to participate in the eighth annual Equal Pay Day, a nationally recognized day to call attention to the pay gap between men and women in the economy.

From noon to 1 p.m., the Women and Girls Foundation of Southwestern Pennsylvania sponsored an Equal Pay Day rally in Market Square to raise awareness about pay inequity – a term referring to unfair wage gaps between men and women in the economy.

“Today is a day for action,” a speaker announced. The crowd responded and held signs that read: “Will work for equality! Equal pay!” Several activists spoke about gender inequity issues, as supporters participated in the crowd.

Business people and locals listened during their lunch break. The blue skies and sunny day had many sitting outside and Market Square became filled with people.

Simmons said the WGF, a non-profit organization based in Pittsburgh, is an advocate for gender rights, and its programs and initiatives drive statewide solutions in response to the problem of gender inequalities.

“We are a grassroots organization,” Simmons said. “Our organization has been sponsoring Equal Pay Day rallies since 2005. WGF has been in operation for about 10 years, founded by six women to raise awareness about gender rights.”

WGF’s mission is to achieve equality for women and girls, now and for generations to come, according to Simmons.

“Our vision is for women and girls in Pennsylvania to have equal access, opportunity and influence in all aspects of their public and private lives,” Simmons said.

Simmons, who has been with WGF for about six years, said she was happy with the turnout of Tuesday’s rally.

Other equal rights groups such as New Voices Pittsburgh, Equal Housing Opportunity and Pennsylvania Health Access Network set up booths during the rally.

La’Tasha Mayes, a coordinator of New Voices Pittsburgh, was a participant.

“The pay gap is large. This day and our efforts are important because it highlights social economic inequalities,” Mayes said. “I think women are increasingly becoming the breadwinners. Many of these women are single or struggling to support a family. They’re forced to divide up their income for transportation, food and all other family needs.”

Mayes acknowledged that although women in Pittsburgh are making about 77 cents for every dollar a man makes, a black woman makes even less.

“With such a gap, there is less money for many women to thrive – and women are very important for any community,” she said.

“We’ve been supporters for a long time. We’re here today to raise awareness about inequalities in health insurance. Today we collected petitions and connected individuals with various resources,” she said.

Among the speakers, Celeste Taylor, a community activist and member of the Black Political Empowerment Project, said she felt the WGF and rally are important for focusing attention to the social issue of economic gender inequality.

“At times, I was a single mother of four sons. I support these events because they affirm the need to fight for equality with resilience, creativity, faith and a focus on human rights,” Taylor said.

After she was done speaking, she joined friend and fellow supporter Lucille Prater-Holliday, a candidate for Pittsburgh Public School Board District 1.

“I support all WGF’s efforts and I’ve been attending all the events,” Prater-Holliday said.

As the former president of various social justice groups such as Action United and Acorn Pittsburgh, Prater-Holliday said there is gradual progress as response from the government, but not enough.

“It is important for all women to show their support. I’ve been close with WGF, conducting surveys, letter writing and campaigning,” she said.

WGF’s Tara Simmons said she is optimistic about the future of both Equal Pay Day’s message and the efforts of WGF and other social justice organizations.

“I hope someday there will be no need to have these kinds of rallies,” Simmons said. “Someday my children or grandchildren won’t need to raise awareness, because hopefully these inequalities won’t be an issue anymore.”

Caption: Ralliers gather in Market Square on Tuesday to bring awareness to the pay gap between men and women. La’Tasha Mayes, New Voices Pittsburgh cooridnator, said that in the city, women make about 77 cents for every dollar a man makes.

April 3, 2014 The Duquesne Duke News Comments Off on Goldwater recipients honored by award

By Carley Thieret | The Duquesne Duke Three Duquesne students were awarded with a scholarship that is typically given to students from Harvard, Stanford and Johns Hopkins. Chemistry major Benjamin Jagger, chemistry and biochemistry major […]

04/25/2019 Colleen Hammond | Staff Writer Beautiful flowers are blooming across the city and pollen is in the air. That can only mean one thing; spring has sprung and a new year of fashion is […]