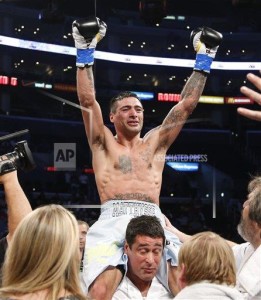 Once in a generation a fighter come along who has one tool that is so supreme that he starts to scare other fighters. Fighter are scared of Lucas Matthysse’s power, which is why he has always struggled to find good opposition. On Saturday he found just that in Lamont Peterson.

The main event on Showtime “Championship Boxing” was a 12 round junior welterweight fight. Lamont Peterson (31-1-1, 16 KOs) faced Lucas Matthysse (33-2-0-1, 31 KOs). The difference in this fight was either going to be the incredible punching power of Matthysse or the length of the talented tactician Peterson. With half a minute remaining in round two Matthysse landed a glancing left hook, but Matthysse’s power is so impactful that the punch actually dropped Peterson. Peterson was able to make it out of the round. With a minute remaining in round three landed simultaneous punches, but Matthysse had the left hook that did damage and Peterson was down instantly. Peterson really labored to get back up and was barely able to beat the ten count. Matthysse need only a few more seconds to land a left hook and for the third and final time he sent Peterson to the ground. Lucas Matthysse won by third round knockout. Peterson should not fall because of this loss, he is one of the best fighters in the best weight class in boxing, but it is almost impossible to withstand the power of Matthysse and he learned that the hard way, with his back on the canvas.

The first fight on Showtime was a welterweight bout scheduled for 12 rounds. Devon Alexander (25-1, 14 KOs) took on Lee Purdy (20-4-1, 13 KOs). Purdy was a last minute replacement and failed to make the weight limit. Alexander opened the fight in a very aggressive manner, which is much different from his recent fights. Purdy struggled to land on Alexander because he was busy defending with his high guard. Alexander, meanwhile, was able to land punches with both hands from every angle. As expected Alexander dominated the last minute replacement, but he was able to show that he can be an exciting fighter in a good action fight. In round six it became clear that Alexander had injured his left hand and was only able to throw his right. He was still able to stay in control despite the injury. After round seven Purdy’s corner told the referee that they wanted the fight to be stopped. The referee stopped the fight before round eight. Devon Alexander won by technical knockout.

Matthysse has the best power of any fighter in any weight class in the world and he proved it yet again on Saturday. Matthysse has the highest KO rate of any active fighter with more than 20 fights. He is quite possibly one of the scariest fighters, the question is will he get to fight the best to prove it?

Lucas Matthysse, of Argentina, celebrates his TKO victory against Lamont Peterson, of Washington D.C., after a WBC junior welterweight boxing match in Atlantic City, Saturday. Matthysse won by TKO in the Third round.