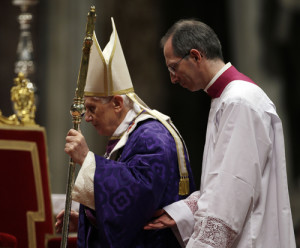 The last time a pope retired was 77 years before Christopher Columbus stepped foot on the Americas.

Pope Benedict XVI announced Monday that he would become the first pope in nearly 600 years to resign, leading theologians, including a few at Duquesne, to react to his retirement.

In a speech Monday morning in Rome, Benedict announced his resignation to the church council, saying “my strengths, due to an advanced age, are no longer suited to an adequate exercise of the Petrine ministry.”

Benedict, 85, is the first pope to resign since 1415, when Pope Gregory XII left his papacy to end the Great Western Schism. Out of the 266 popes to serve the church in nearly 2,000 years, only three others voluntarily resigned.

“In the past, popes often resigned due to scandal or pressure from other church leaders or civil rulers,” O’Brien said. “With life expectancies being longer now than in earlier centuries, future popes may face similar decisions regarding resignation upon becoming ill or incapacitated.”

According to Nick Cafardi, dean emeritus and professor in the School of Law, the conclave will begin “shortly after” Feb. 28 at 8 p.m., when the resignation is official. To elect Benedict’s successor, the 117 Cardinals currently under the age of 80 will assemble at the Vatican for a vote.

Don Briel, director for the Center for Catholic Studies at the University of Saint Thomas, said that even though Benedict did not die, the presumption is that there will be a 15 to 20 day preparation period before election to “discuss the current challenges and opportunities for the Church and of the qualities necessary for the new pope.” Then, on the first day of balloting, the Cardinal electors will take one vote in writing, which will be burned following the count.

“If no one is elected on the first day, two votes are taken on subsequent mornings or afternoons until a candidate receives a two thirds majority,” Briel said. “If the candidate accepts, he is then pope immediately.”

Until the election is over, the College of Cardinals will temporarily lead the Church as a functioning body, Cafardi said.

In the nearly eight years he held the papacy, Benedict left behind a legacy of “scholarly commitment and careful distinction in addressing the complex issues of faith in the modern world,” Briel said. Cafardi said that what made Benedict unique were his theological writings based on his own individual views, rather than those of the pope.

“He was a phenomenal theologian,” Cafardi said. “His books on the life of Christ are wonderful examples of theology with a really common touch to them.”

In contrast, Paula Kane, the John and Lucine O’Brien Marous Chair of Contemporary Catholic Studies at the University of Pittsburgh, said that Benedict did things that “were not welcomed by Catholics.”

“I think it’s important to recall that this pope prosecuted a lot of people,” Kane said. “He turned his sights on American nuns, as if they were the problem.”

Kane also said she wants the new pope to handle the issue of sexual abuse and better implement the documents of Vatican II.

Though there are betting websites all over the Internet putting odds on who the next pope will be, Briel said it is “nearly impossible” to name the favorite.

“It really is the man, not the nationality, that will count in the end,” Briel said.

As for the chances an American is elected as the next pope, Cafardi said that though “we have very admirable American Cardinals,” the chances are “slim to none.”

By Kaye Burnet | The Duquesne Duke With racist chants and photos of naked, unconscious women putting fraternities at Penn State and Oklahoma University in the national spotlight, members of Duquesne’s sororities and fraternities are […]

DU lacrosse rolls to win over SFU, improves to 3-0

February 28, 2019 The Duquesne Duke Sports, Women's Lacrosse Comments Off on DU lacrosse rolls to win over SFU, improves to 3-0

Drew White | Staff Writer Feb. 28, 2019 On Wednesday afternoon, Duquesne had the chance to open its season 3-0 for the first time since 1999, and it certainly didn’t squander the opportunity to do […]

September 21, 2017 The Duquesne Duke Columns, Sports Comments Off on Try empathizing with Kevin Durant for a change