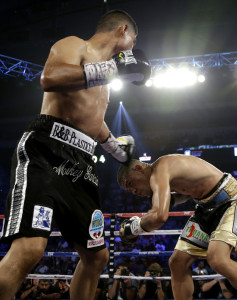 A weekend filled with young elite talent scoring devastating knockouts on their way to the top, what more do you need?

The main event on HBO “Boxing After Dark” from Houston, Texas was a featherweight bout set for 12 rounds. Miguel Angel “Mikey” Garcia (32-0, 27 KOs) faced Juan Manuel “Juanma” Lopez (33-3, 30 KOs). Garcia could not make weight and had to pay a large sum of money to Lopez in order to ensure that the fight would go on. The fighters were exchanging some good, hard punches early. With a minute left in round two Garcia landed a magnificent right hook that dropped Lopez. Lopez got up quickly and seemed to recover well. Garcia is an example of a fighter who has all of the physical gifts, but also the intelligence to continue learning about his craft. Every move Garcia makes in the ring is the correct boxing move. It seems like he thinks in a way that most fighters don’t. Garcia continued to dominate the fight just waiting for another opportunity to catch Lopez with a power shot. Lopez showed a lot of heart by taking several devastating shots and continuing to put pressure on Garcia. With a minute and a half left in round four Garcia landed a left hook that dropped Lopez. Lopez got back to his feet, but was still shaky on his feet. The referee stopped the fight. Miguel Angel “Mikey” Garcia won by TKO at 1:35 of round four.

The first fight on HBO was a lightweight match schedule for 10 rounds. Terence Crawford (21-0, 16 KOs) went head-to-head with Alejandro Sanabria (34-2-1, 25 KOs). The fight was slow early as both fighters were feeling each other out. Two counterpunchers can make a slow fight, but Crawford is a skilled fighter who has shown some big potential. Crawford started to pick up the pace in round three and he was able to land some strong punches. He also took a few punches and even though Sanabria’s power is somewhat of an unknown it is good to see that he was able to handle some flush shots. The first punch of round six was a strong left hook from Crawford and it dropped Sanabria. Sanabria got to his feet, but was not all the way back and the referee rightly stopped the fight. Terence Crawford won by TKO at 17 seconds of round six.

The main event on NBCSN “Fight Night” from Bethlehem, Pennsylvania was 10 rounds of action in the heavyweight division. Andrey Fedosov (24-3, 19 KOs) challenged Bryant Jennings (17-0, 9 KOs). Jennings’ wingspan is a major advantage, which he uses well. Fedosov was a well-matched opponent, who was able to do some good work against Jennings. With two minutes remaining in round three Jennings landed a left hook that hurt Fedosov badly, but Fedosov fought back and didn’t fall even after Jennings’ onslaught. Fedosov somehow escaped the round without a knockdown, which was a testament to his incredible chin. Jennings is surprisingly accurate form the outside, which allows him to avoid trouble in close. That doesn’t mean that Jennings is a bad fighter in close, he is actually very affective in close, but his advantage comes from being able to hit his opponent when his opponent can’t reach him. After the near knockdown in round three Jennings lapsed into a slight lull, but in round six he rallied to take back control of the fight. In between rounds six and seven Fedosov told his corner he could not see out of his swollen left eye. The referee then stopped the fight. Bryant Jennings won by TKO at the beginning of round seven.

The fight to fill time was a four round junior middleweight fight. Arturo Trujillo (0-1, 1 KO) faced Anthony Watson (0-1). A left hook from Trujillo ten seconds into the fight dropped Watson. He got up, but ten seconds later another left hook dropped Watson for the final time. Only 29 seconds into round one Arturo Trujillo won his pro debut by the best knockout of the weekend.

The second fight on “Fight Night” was a light heavyweight matchup set up for 12 rounds. Sergey Kovalev (21-0-1, 19 KOs) met Cornelius White (21-2, 16 KOs) in an action packed co-main event. Kovalev is not just a power puncher. He has good boxing skills and he can move well for a light heavyweight. White was able to survive the first few rounds of aggressive pressure from Kovalev mostly because of his god movement. With two minutes left in round three Kovalev was able to land a straight left to punctuate a strong combination and it dropped White. White got up, but Kovalev moved in quickly to capture the moment. It took Kovalev only ten seconds to send White back to the canvas with a shot to the body followed by the left hook. White valiantly got back up and tried to escape the round, but there was just too much time left on the clock. Thirty seconds later White was dropped for the final time, again with the left hook, as the referee stopped the fight without even starting his ten-count. Sergey Kovalev won by TKO at 1:42 of round three.

The first fight on NBCSN was a 10-round welterweight bout. Ronald Cruz (17-2, 12 KOs) and Raymond Narh (26-2, 21 KOs) were the combatants. Narh was the aggressor early. Cruz decided to join the fight in round three and he hurt Narh with his first good punch of the fight, unfortunately for Cruz it came with only a few seconds left and he couldn’t seize the opening. Cruz was not able to stay busy because he was defending the relentless attack of Narh. Cruz was using the same left to the body-right to the head combination, but it was easy to see the right was coming and Narh was able to stop it before it got to his head. Cruz had the power to hurt Narh he just didn’t seem how to handle Narh’s style. The fight went all 10 rounds and the judges scored it 96-94, 98-92 and 100-90 all for Narh. Raymond Narh won by unanimous decision.

The main event on ESPN2 “Friday Night Fights” from West Orange, New Jersey was a 10-round bantamweight slugfest. Jundy Maraon (15-1-1, 12 KOs) was up against Juan Carlos Payano (14-0, 8 KOs). In round one Payano was cut over his right eye as a result of a clash of heads. Payano was looking to counter and Maraon was tentative early, possibly because of the long layoffs he has in between his three most recent fights. With 10 seconds left in round three Maraon landed a left hook and it dropped Payano. Payano got up before ten and the round ended giving him a minute to recover. Despite the knockdown Payano was able to control the action because he was the faster fighter. With two and a half minutes left in round seven Payano connected with landed a combination that ended with a left hook that sent Maraon to the canvas. Maraon was unable to answer the ten count. Juan Carlos Payano won by knockout at 39 seconds of round seven.

The second fight was a junior featherweight fight set for eight rounds. Jorge Diaz (17-2, 19 KOs) faced Yenifel Vicente (25-1-2-1, 17 KOs). Both fighters were active early, but Vicente was controlling the ring by getting Diaz against the ropes. Both fighters were stunned in round one, as neither guy was interested in defense and both were able to land power punches. With a minute and a half remaining in round four Vicente landed a strong right uppercut that caught Diaz on the jaw and dropped him. Diaz got back up before the ten count, but was clearly still hurt and Vicente only needed a few more shots to end the fight as the referee stepped in when Diaz was unable to protect himself. Yenifel Vicente won by knockout at 2:02 into round four.

The first fight on ESPN2 was a four-round welterweight bout. Anthony Gangemi (4-0, 3 KOs) took on Anthony Prescott (1-2-1, 1 KO). Gangemi has a lot more experience as an amateur. The fight was even in the first two rounds, as it seemed like Gangemi was only looking for the one punch fight-ender. At the end of round three Prescott started to have some success with his right hand. It appeared that he had stunned Gangemi, but he was able to escape the round. Prescott opened the final round with some momentum, but he was not able to capitalize as the round was dragged back into the mud of the first two rounds, filled with clinches and inaccurate punches. Gangemi was controlling the action and it wasn’t pretty, but it was enough to get him the win. The judges scored the fight 38-38, 40-36 and 39-37 both for Gangemi. Anthony Gangemi won by majority decision.

With the departure of most of the top boxing talent from HBO to Showtime the landscape of televised boxing has dramatically changed. The ridiculous, child-like feud between Top Rank and Golden Boy has perhaps opened the door for other promoters to rise in the ranks. The exceptional card on NBCSN, along with the rise of other promotion teams such as SMS and TMT, could mark a shift in boxing. This could be the beginning of a much-needed overhaul in the sport of boxing. One of the sport’s two biggest promotion companies will need to fall in order for the system to change. This is exciting, but also dangerous because boxing will need to survive a very rough period before that change occurs.