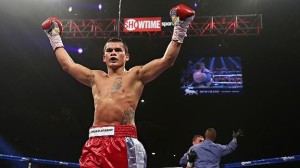 A weekend filled with upsets, knockouts and technical masterpieces only comes along a couple of times a year and this week was one of them. The winners from this weekend will move on to bigger and better things, but there are some losers who will still be a force in their weight-classes.

The main event on Showtime “Championship Boxing” from Carson, California was a welterweight fight set for 12 rounds. Josesito Lopez (30-6-0-1, 18 KOs) faced Marcos Maidana (34-3, 31 KOs). Maidana has special power. For someone with the knockout rate that Maidana has, he has good hand speed. Lopez was much better than the last time he was in the ring, due mostly to the fact that he is at the weight that he is most comfortable with. Lopez was willing to get into a brawl with Maidana, which caught Maidana off guard. Maidana was hurt by Lopez in rounds three and four, but Lopez couldn’t put Maidana down. They went back and forth trading punches and rounds. Maidana is familiar with being in trouble and has fought back despite being behind before. With two minutes and 15 seconds left in round six Maidana landed a right hook to the temple that dropped Lopez. Lopez got back up, but was cornered by Maidana. Maidana landed right hook after right hook and Lopez did nothing to escape. The referee was forced to step in and stop the fight. It was a disappointing stoppage because the fight was so close and the momentum kept swinging, but the stoppage was the correct decision. Marcos Maidana won by knockout in round six.

The next fight on Showtime was a 12-round super welterweight clash. Erislandy Lara (19-1-2, 13 KOs) faced Alfredo Angulo (22-4, 18 KOs). Lara came out strong and was landing his left hook whenever he needed to. Angulo was doing well to hit Lara from every angle with each hand. Angulo’s body work was starting to slow Lara’s hellacious pace by the third round. With a minute and 45 seconds remaining in round four Angulo landed an overhand left that dropped Lara. Lara did well to make it out of the round and recover from the damage. Lara seemed to pick his pace back up after the knockdown. With a minute and a half remaining in round nine Angulo anded a left hook that dropped Lara for the second time in the fight. Lara was clearly exhausted, but he use every last bit of his energy to escape the round. The fight was back and forth and the last few rounds could still decide the winner. With a minute remaining in round ten Lara landed a thunderous combination of four rights and lefts that hurt Angulo. It was said after that Angulo may have a fractured orbital bone. Angulo turned his back on the action and the referee was forced to stop the fight. Erislandy Lara won TKO, due to Angulo’s injury, in round ten.

The first fight on Saturday’s Showtime was a 12-round super welterweight bout. Jermell Charlo (20-0, 10 KOs) faced Demetrius Hopkins (33-2-1, 13 KOs). The fighters were feeling each other out early. Charlo is a great young prospect, but Hopkins is by far the best competition he has faced. Hopkins has a tendency to make his fights slow and this fight was especially slow because there were two fighters each trying to set up their jab. Charlo was having trouble finding Hopkins because Hopkins was moving all around the ring, but that also meant Hopkins was doing nothing on offense. Charlo was landing enough to be winning rounds, but not as much as he would have liked to be landing. The fight went 12 rounds. The judges scored the bout 115-113, 115-113 and 115-113 all for Charlo. Jermell Charlo passed his toughest test so far and while it wasn’t very impressive he won today so he can look good tomorrow.

The main event on HBO “Boxing After Dark” from Canada was a 12-round light heavyweight bout. Adonis Stevenson (21-1, 18 KOs) challenged Chad Dawson (31-3, 17 KOs). With two minutes remaining in round one Stevenson landed a fluid counter left that caught Dawson defenseless. Dawson got back to his feet, but was clearly still out. The referee made the right decision and stopped the fight. Adonis Stevenson won by knockout in the first round. Dawson has really struggled recently, but he should be commended because he has been willing to challenge some of the best fighters in the world, which many fighters don’t do when they reach the top.

The first fight on HBO was a 12-round meeting of two lightweights. Yuriorkis Gamboa (23-0, 16 KOs) faced Darleys Perez (28-1, 19 KOs). Gamboa is very talented, but he doesn’t have an identity in boxing yet and has had some troubles with both management and coaching that have caused his career to slow. The opening round was slow as both fighters were feeling each other out, until there was about 10 seconds left in the round. Gamboa landed a glancing left and the effect knocked Perez off of his feet. Perez escaped the round, but he lost a round he probably could have won. Gamboa is almost always the smaller fighter, which can be problematic because he doesn’t like to fight inside. Gamboa started to slip into a lazy attitude and he wasn’t pushing the action. Perez was climbing back into the fight, but it was only because Gamboa had left the door wide open for him. Gamboa was doing just enough to win the fight, but he was not dazzling, which is what he needed to do with an opportunity like this. The fight went the full 12 and the judges had it 116-11, 116-111 and 115-112 all for Gamboa. Yuriorkis Gamboa won by unanimous decision, but did not live up to the hype that surrounds the type of talent he has.

The main event on Showtime “ShoBox: The New Generation” from Verona, N.y. was a 10-round middleweight matchup. Jorge Melendez (26-3-1, 25 KOs) faced Nick Brinson (15-1-2, 6 KOs). Brinson took the fight on one week’s notice and lost 20 pounds in that week to make weight. Melendez was cautious from the outset. Brinson, on the other hand, was aggressive trying to hurt Melendez early. The roles were reversed from what you would expect based on the records. With two minutes left in round four a right to left combination form Brinson dropped Melendez. With 30 seconds left in the same round Melendez struck like a viper. Melendez landed a sneaky left hook in close and it wobbled Brinson. Melendez followed up with an onslaught of rights and lefts and the referee ruled that the ropes stopped Brinson from falling. Brinson was given a ten count, but recovered and made it out of the round. Following the knockdowns Brinson took control by making great use of his jab. In round nine Melendez was continuously hitting Brinson behind the head and while a point was taken from Melendez the referee was not helping Brinson because he kept indicating to Brinson that if he could not continue he would lose. That was the incorrect thing to tell the young Brinson because if the fight was stopped due to a foul then the rules indicate it should be a technical decision and not a TKO. At the end of round nine the fighters and cornermen started to get aggravated and they were all yelling in the center of the ring, but luckily the referee was able to stop it before there was any major issues. The fight went the full 10 rounds. The judges scored the fight 96-92, 98-91 and 99-90 all for Brinson. Nick Brinson won the fight by unanimous decision on short notice by controlling the action throughout.

The first fight on Friday’s Showtime card was an eight-round lightweight bout. Jeffrey Fontanez (12-0, 9 KOs) faced Alejandro Rodriguez (18-11, 11 KOs). The fight was close early as Rodriguez, the veteran, showed Fontanez, the prospect, that this was going to be a very tough fight. Fontanez did well to keep the fight at a comfortable distance, which did not allow Rodriguez to do much because Fontanez has a big reach advantage. Fontanez had not been eight rounds before. Rodriguez started pushing the pace through the middle rounds and he was the aggressor as Fontanez never went for the kill. With five seconds left in round seven Rodriguez landed an overhand right that knocked Fontanez down. Fontanez got up from the first knockdown of his career. Fontanez strangely came out in the final round and rather than attacking ran around the ring for three minutes. It was peculiar to see the more skilled fighter running when he may have needed the round to win the fight. The fight went to the judges and they had it 76-75 Rodriguez, 77-74 Fontanez and 78-73 Fontanez. Jeffrey Fontanez won by split decision in a fight he should have dominated.

The exciting thing about this weekend was the up-and-coming talent that was on display. Charlo, Lara, Gamboa and Brinson will be exciting to watch for years to come and one day they may be the Maidanas and Stevensons of this weekend.

By Saúl Berríos-Thomas     A man who knows more about boxing than almost anyone else in the game is very hard to beat. Bernard Hopkins knows more than that man. Hopkins fought his first […]