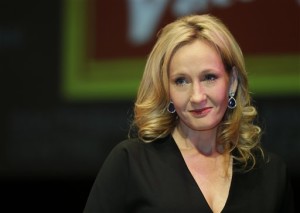 The Harry Potter fandom is voracious. The obsession is fueled by the original, massively popular seven-book series and the blockbuster film adaptations that earned more than 7.5 billion in ticket sales.

There are video games, companion websites such as Pottermore and Mugglenet, spin-off books written by J.K. Rowling herself, slews of merchandise and even a massive theme park in Universal Studios, Florida.

Harry Potter and its author are phenomenons.

And yet, the reaction to the news that J.K. Rowling is authoring a new series of films based in the Harry Potter universe is not pure excitement. The fandom is psyched, certainly, but their fervor is tempered by surprise and, to some degree, concern.

The United Kingdom’s most popular author announced this week that she will be writing a new series of films (not novels) for Warner Brothers Studios based on the story of Newt Scamander, author of the textbook Fantastic Beasts and Where to Find Them in the original HP narrative. The series will take place 70 years before Harry’s birth and will detail Scamander’s adventures in writing the textbook.

J.K. Rowling is no stranger to spin-offs. She authored several of the books prevalent in the HP storyline, including Quidditch Through the Ages, Tales of Beetle and the Bard, and even Fantastic Beasts and Where to Find Them.

While these titles were received with excitement and interest – because, seriously, what fan wouldn’t want to add Harry Potter’s own textbooks to their own shelf? – the news of the films is met with confusion.

If the HP universe has previously endured spin-off titles, adaptations and ruthless merchandising (Lego Harry Potter, anyone?), then why is this newest series so concerning? Why isn’t the HP fandom enthralled at the news that what they wanted for so long – more Harry Potter stories – is finally a reality?

A column in Business Insider criticized the new film series for being a complete departure from the Harry Potter story. How, it argues, can a film series about the creation of encyclopedias measure up to the drama of the original series?

After the stern announcement after Harry Potter and the Deathly Hallows that there truly were only going to be seven books, fans comforted themselves by arguing that it was simply better to end there, despite how difficult it was to leave the HP universe.

To hear now that Rowling is writing another series, even though it is not a prequel or sequel to the original seven books, feels like a promise revoked.

Posts on fan sites such as Harry Potter Forum and Potter Forum demonstrate worry that Warner Brothers Pictures (and, by extension, J.K. Rowling) are writing the new series for the financial gain. One tweet, captured on FanVoice, describes the new films as, “a blatant, obvious, and uninspiring cash grab.”

Further conversation on Twitter points to the contrary when one user expressed his “enormous confidence” in Rowling and the
new series.

Perhaps the most telling support for the new series came from the producer of the Harry Potter films David Heyman, who expressed enthusiasm for the new project and for J.K. Rowling herself.

“She’s a great storyteller, and I’m sure this will be something really great. She wouldn’t do it otherwise – she doesn’t need to do it… She’s doing it because she has a story to tell,” said Heyman in an interview with Hypable.

The wild claims against Rowling are generally unfounded and thoughtless, not in the least because Rowling has always left open the possibility for more stories in the wizarding world. The fact remains that the Harry Potter fandom needs to step away from its emotions before passing judgment – positive or negative – on J.K. Rowling and the new film series.

J.K. Rowling has been very clear that this is not a continuation of Harry Potter. It is an unrelated extension series that takes place before the story of The Boy Who Lived, or even the arch-villain Voldemort.

Admittedly, the announcement is sudden, especially after the finality of the conclusion of the Harry Potter series, and it feels awkward to introduce such an unexpected spin-off, but the true concern about this series should not be that it is a betrayal of the fandom or a pursuit of a yet more astronomical fortune.

An unemotional view of the situation does illicit some concerns, however, not the least of which is that J.K. Rowling is not a film writer – she’s a novelist. Screen plays are an entirely different discipline than novels, requiring far different narrative techniques and the inclusion of an entirely new storytelling tool: the camera.

Rowling is a literary genius, but she is yet untested on the silver screen. It’s difficult to predict whether her talents as a writer – her eye for detail and her extensive character development – will translate into a medium where she has so much less control. Without an omniscient narrator, relying solely on dialogue and occasional screen direction, it is unclear whether this new series will showcase J.K. Rowling’s abilities as a storyteller.

That being said, however, Rowling hasn’t failed as of yet. Harry Potter continues to make her the most popular author alive, and her two most recent books, A Casual Vacancy and The Cuckoo’s Calling, both received positive reviews

J.K. Rowling deserves the benefit of the doubt in her newest endeavor and the empathy, if not the support, of her fan base as she works in an unfamiliar medium. The fandom and the community at large need to reserve judgment until this newest installment in the Harry Potter universe is released.

In Rowling we trust.

AP – This is a Thursday, Sept. 27, 2012 file photo of British author J.K. Rowling as she poses for the photographers during photo call to unveil her new book, entitled: ‘The Casual Vacancy’, at the Southbank Centre in London. J.K. Rowling’s world of wizardry is coming back to the big screen _ but without Harry Potter. Studio Warner Bros. announced Thursday, Sept. 12, 2013, that Rowling will write the screenplay for a movie based on “Fantastic Beasts and Where to Find Them,” her textbook to the magical universe she created in the Potter stories. (AP Photo/Lefteris Pitarakis, File)

Allison Keene is a senior English and Journalism major and can be reached at keenea1@duq.edu.

By Nicole Prieto | The Duquesne Duke “Harry Potter and the Cursed Child,” the much-anticipated eighth installment of J.K. Rowling’s saga, made its print and digital debut on July 31, just a day after its […]