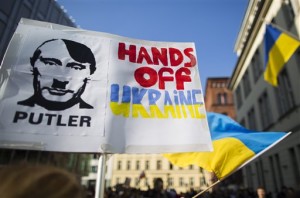 Speaking at an event for the Boys & Girls Clubs of Long Beach, Calif. Secretary of State Hillary Clinton compared the Russian troop deployment in Crimea to Hitler’s aggressive Nazi foreign policy. She drew parallels between Hitler’s logic of “protecting” ethnic Germans in foreign countries to Vladimir Putin’s same claims to protect Russians living in the Ukraine.

Fox News picked up Clinton’s comments, “[This is like] what Hitler did back in the 30s, the Germans by ancestry who were in places like Czechoslovakia and Romania and other places, Hitler kept saying they’re not being treated right. I must go and protect my people.” Clinton makes a valid point, and a chilling one that the United States must heed.

Putin for his part has claimed that it is Russia’s destiny to protect the ethnic Russians that inhabit the Ukraine. Crimea has long been the jewel of the Russian Empire, dating back at least 225 years. It has been the shocking parallel of Russian strength and American retreat and weakness that has been the most astonishing.

Ukraine is well positioned with oil pipelines running through the country from Russia west to Europe.  According to The Washington Post, Russia provides more than half of Ukraine’s natural gas needs and has restricted supplies due to politics, price and late payments since 2006. Worse, these cuts hurt countries in Europe that rely on Russian gas from the pipelines that run through Ukraine. But recently, gas competition has increased due to US shale production and countries such as Qatar and Russia have found it difficult to maintain steady prices within the Ukraine. Mufson continues to say that Ukraine has also bought Russian gas from Germany, who pays lower prices for it, thus Russian gas is competing against itself in Ukraine. It goes without saying that this gas situation has heated up tensions between the two countries.

So the developing situation in Ukraine prompted a response from Clinton. The potency of Clinton’s comments implies and questions what if Russia makes the same claims about other Russian speakers in Eastern Europe? This does not bode well for other Slavic nations in Eastern Europe, where Russia has always been held with suspicion. If the same claim may be said about their countries by Putin, what would the west do?

Another point of consideration for Russia would be that they should be mindful of the position that they are putting themselves in with regards to China. China is a rising power on the doorstep of Russia that continues to look for more natural resources to fuel its growth. On March 3, Historian Paul Rahe wrote for The Wall Street Journal about this threat. The demographic implosion that Russia is facing, coupled with the many Chinese citizens that are traveling to Siberia in search for work could pose a future threat for Russia. In the future, to seize these lands China can very easily play the same game that Russia is playing now. China can claim the need to protect the ethnic Chinese living in oppressive Russia. What will the Russians do then? Who can they turn to for support? Better yet, who may be willing to help?

Listening to the words of Clinton who appropriately reminds us of the historical parallels between Putin’s acts and that of German aggression in the 1930s, the United States needs to lead against this threat on the west. A good way to show support to our allies in Eastern Europe is to not abandon them. Returning the missile defense to Poland would be a good start.

AP – Activists holding placards depicting Russian President Vladimir Putin as Adolf Hitler reading Putler and “hands off Ukraine” in front of the Ukrainian embassy during a solidarity demonstration for the Ukraine and protesting the buildup of Russias military presence in Crimea, in Berlin, Germany, Sunday, March 9, 2014. (AP Photo/Gero Breloer)

Kellen Stepler & Zoe Stratos | The Duquesne Duke 1/28/2021 Levi DeBlase knew that as a pharmacist, giving vaccines was in the job description. He didn’t realize that he would be administering life saving vaccines […]

By Carolyn Conte | The Duquesne Duke On the fifth floor of Libermann Hall, Duquesne nursing students rush to deliver a baby after its mother goes into shock, her temperature dropping and her weak pulse […]

The world lost a great one: Rest easy José Fernández

September 29, 2016 The Duquesne Duke Sports Comments Off on The world lost a great one: Rest easy José Fernández

By Andrew Holman | Sports Editor A 24-year-old ace. A big league pitcher. A two-time All-Star. A rookie of the year. A role model in the Miami and Cuban communities. A heroic son. A loving […]