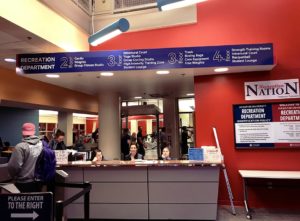 Duquesne University’s A.J. Palumbo Center is set to undergo a comprehensive renovation project to modernize the athletic complex, which is home to Duquesne’s student-athlete training facilities, administrative offices for the athletic department and is host to Dukes basketball and volleyball games. Originally opened in 1988, the Palumbo Center has received periodic updates and renovations in the decades since.

Those who frequent the upper floors of the Power Center will notice changes as the facility becomes home to daily operations of the athletic department over the next 18 months. Student-athlete equipment has been moved into the building to accommodate training while the Palumbo Center is unavailable, causing a few changes in the setup of the Power Center according to Assistant Director of Recreation Services, Amber Lasure.

Through interdepartmental planning and shuffling of group-fitness class schedules, students should notice few changes to the available equipment and classes at the Power Center.

“We alternate group-fitness class times … in the past we would have [three classes] during our peak times, we now alternate the times and days to accommodate studio availability. We put a lot of planning into the process so that when the changes took effect they would be as seamless as possible,” Lasure said.

Students have noticed the differences in the overall availability of some facilities at the Power Center already.

“I’ve found that most of the yoga studios have been filled with equipment which has impacted my ability to workout as I had in the past,” said freshman physics major Alyssa Gadsby.

While availability of facilities has been affected, other students haven’t noticed much change in the attendance at the Power Center.

“To be honest I haven’t noticed many more students at the Power Center, and the changes haven’t inconvenienced me yet,” said freshman nursing major Kirsa Danis.

Director of Recreation Services Dan McCarthy confirmed attendance at the Power Center has not increased dramatically despite the changes.

“Yesterday we had 1,600 students come down, historically we’re on par with where we usually are in January,” McCarthy said.

McCarthy also confirmed that other Power Center and Recreation Services events and clubs have not been affected.

“Intramurals have been status quo on the third and fourth floor as well as club sports that need a little more space,” McCarthy said.

The changes at the Power Center will continue to evolve to accommodate new ideas and to better serve student needs as feedback begins to come in about how to improve the facility.

“We make a lot of our decisions through student focus-groups and surveys … it’s how we make our changes to serve student needs” Lasure said.

The Palumbo Center, which will be the UPMC Chuck Cooper Fieldhouse when it reopens, is set to open sometime in 2021, upon which the Power Center will return to previous operations.

Raymond Arke | Editor-in-Chief 10/23/18 Duquesne University, donors and public officials celebrated the announcement of the UPMC Cooper Fieldhouse, set to replace the existing A.J. Palumbo Center, at a special event on Oct. 23. The […]

By Victor Essel | The Duquesne Duke President Charles J. Dougherty has named Dean B. McFarlin the new dean of the Palumbo-Donahue School of Business, effective July 1. “Dr. McFarlin brings to us years of […]

By Brittney Jackson | The Duquesne Duke The Allegheny County Health Department is collaborating with hospitals, health care providers, emergency medical technicians and clinics to make sure employees can identify the Ebola virus. According to […]