Zara, a leading retailer on the high street, reflected today’s generation of ignorant Millennials on Wednesday, Aug. 27, when it unveiled, and quickly revoked, its children’s pajama shirt that closely resembled a Nazi Holocaust uniform.

The pajama shirt, entitled the “Sheriff” shirt, was white with blue horizontal stripes and a yellow star on the left side of the chest encompassing cut-out letters spelling “Sheriff.” However, it’s hard to see that anything is written on the yellow star unless the shirt is looked at close-up.

The concentration camp uniform “tended to have vertical stripes that sometimes were blue, and those of the Jewish religious practice often were forced to wear a six-pointed yellow star on the left side of the chest. The glaring similarity between the two shirts is both shocking and appalling. A major genocide in history is being overlooked by two shirts appearing to be exactly the same.

This shows exactly how ignorant today’s generation of workers are when it comes to knowledge of recent history. The Holocaust is a major and important genocide that should be covered in every school’s curriculum. Obviously, since mistakes like this occur, students are not being taught recent historical events. This results in students becoming ignorant workers, like those of Zara, and the continuation of embarrassing mistakes.

This isn’t the first time Zara had to remove its merchandise because of Jewish cultural insensitivity. “In 2007, [Zara] removed a handbag decorated with a swastika, and a few days ago withdrew a T-shirt with the slogan ‘White is the new black,’” according to a Financial Times article by John Aglionby published on Aug. 27. One of the largest and most successful high-street retailers, Spain-based Zara prides itself on being eco-friendly. Zara has created a retail empire with over 200 professionals on their creative team. Their 2,000 stores are located in leading cities within 88 countries according to Zara’s parent company Inditex. It’s unbelievable that not one of the 200 people on their creative team noticed the shirt’s similarity to a Holocaust uniform.

This is just one of the many examples of how today’s generation of workers have not been educated properly in the subject of history. Zara’s creative team, responsible for the design of the shirt, are most likely younger people, those of the Millennial generation. Their ignorance is inexcusable. The internet is a tool every person of the Millennial generation has had access to and this means that they do not have an excuse for being ignorant.

The Beloit College’s Mindset List, created in 1998 to showcase the incoming college class’ mindset, has described previous college classes as “myopic when it comes to political and cultural history that happened before they were born,” according to a Forbes article “Just How Clueless are Millennials when it comes to popular history?” published in April 2014. The responsibility is not only on the teachers, but also on the school system as a whole. In a system full of textbooks and multiple-choice testing, students don’t need to internalize information to pass a class. “If every student has computers in their pockets, do they need to learn historical facts — or how to look them up?” asks NPR Staff in their article “Fact Is, Students Have Never Known History” published in 2011.

American students are generally not as proficient in history as they are in other subjects. A New York Times article, “US Students Remain Poor at History, Tests Show,” published in 2011 states, “Students’ poor showing on the [history standardized] tests underlines neglect shown to the subject by federal and state policy makers, especially since the 2002 No Child Left Behind act began requiring schools to raise scores in math and reading but in no other subject.” The neglect shown to history in public schools is going to become increasingly apparent in the future when more embarrassing mistakes, like Zara’s, continue to occur.

Zara is not the only retailer to showcase today’s generation of ignorant workers, “Earlier this year Hennes & Mauritz, Zara’s Swedish rival, withdrew a tank-top with a human skull inside a Star of David” according to 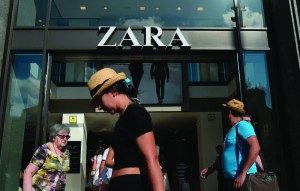 article published on Aug. 27. That’s now two companies that have shown ignorance of a recent historical event. How many more companies must make the same mistake before schools make a change in their curriculum?

This blatant representation of the Millennial generation does not serve well for the future. As the future remains more uncertain a greater knowledge and awareness of the past is needed.

Carrie Garrison is a Junior violin performance and journalism major and can be reached at carriegarrison@icloud.com

September 25, 2013 The Duquesne Duke Sports Comments Off on Pirates bringing excitement to the Bluff

Andy Hornak | For The Duquesne Duke With October around the corner, a cool air chills the city and people prepare for a long winter.  Pirates’ fans, however, find warmth in the excitement surrounding their […]

Brandon Addeo | News Editor Senior Duquesne swimmer Hallie McCue was facing a window in the Fort Lauderdale airport awaiting her flight home when she first heard the gunshots. “There was a pack of people […]

Future of soccer in U.S. uncertain after loss

Drew White | Staff Writer 10/19/2017 Impossible. Unthinkable. Unbelievable. These are just a few words to depict what’s going on inside of the heads of USA soccer fans following a stunning 2-1 loss at the […]