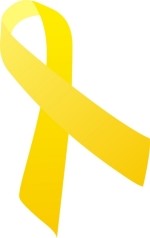 Judgements. We all have them. We judge others for the way they dress, the way they speak and the way they act. Our society puts so much focus on what is on the surface that often times we forget what is underneath. Unless we really know someone, we have no idea what is going on in the lives of others. We pass them on A-Walk, give them a wave and move on with the rest of our day.
As the calendar flips from August to September, the new month brings more than just the start of school and the changing of the weather. September is National Suicide Prevention Month and should be a time that everyone takes out of their busy lives to put judgments aside and dig deeper into the meaning of suicide awareness.

You are not alone is the theme of  National Suicide Prevention Day on Sept. 10. It is a reminder not only to you but anyone else who may be struggling with any aspect of their life and that there is hope, and that every day matters.
According to Suicide Awareness Voices of Education, also known as SAVE, 40,000 Americans die from suicide each year. On an average day, one person ends their life every 17 minutes. That’s the time it takes us to walk from Towers to Lieberman, or from campus to Market Square. Suicide is the third most common cause of death for adolescents and young adults. According to SAVE, suicide attempts have increased drastically in the past decade. There is an average of 734,000 suicide attempts per year in the past five years. Five million living Americans have attempted to kill themselves, and what makes this issue even bigger is that it not only affects one person, but their family and loved ones as well. SAVE suggests that each case of suicide effects at least six other people.
The college years can be some of the most difficult of our lives. They contain experiences and challenges that we have never experienced before, and sometimes these obstacles make it feel as though we are alone and have nowhere to turn. We can ask ourselves why this is happening, and we can judge those who commit suicide, but what does this accomplish? Take Robin William’s death for instance. All of the sudden after his death everyone became experts on online discussion boards and comment posts about why Williams allegedly committed suicide,not hesitating to state their brutally honest opinions.

Instead of becoming overnight experts on the topic of suicide or trying to reach inside the minds of those who committed it, why not aim for prevention instead? What if we pressed rewind and never let it get this far? This isn’t a change that is going to be made over night, but the Suicide Prevention Resource Center has put a new prevention plan into place explaining steps to suicide prevention as well as signs to look out for if you think a loved one might be experiencing thoughts of suicide.
We all can contribute to the efforts to prevent suicide. The goal of suicide prevention month is to raise awareness and to take a step in the right direction towards minimizing the number of suicides that occur each year. We can promote suicide prevention by doing simple things that we do every day. Every second, 6,000 tweets are sent. Take the time out of your day to tweet the hashtag #WSPD14.

I have gone through low times in my life, and there was one instance that I will never forget where my mom told me, “No matter what happens, nothing will ever be that bad, and someone will always be there for you.” This is a message that should be spread to everyone across campus. Whether it is a professor, a friend or University Counseling, there is always someone on campus that will be there to get you through any situation. Sometimes a change in environment, joining a new club or meeting new people can be that change that you need when you are struggling.

If nothing else for the month of September, and National Suicide Prevention day on Sept. 10 especially, reach out to those who need a friend, proudly wear yellow on campus on suicide awareness and show that no matter what, everyone at Duquesne has somebody.

Carley Thieret is a Junior advertising major and can be reached at cjthieret@gmail.com

By Rebekah Devorak | Opinions Editor For some students, one of the worst parts about coming back to college in the fall is missing out on home-cooked meals. Instead, daily culinary adventures are confined to […]

By Jen Cardone | The Duquesne Duke The Mary Pappert School of Music was recently named one of the top 58 schools for music education in the country in the new edition of Creative Colleges: […]

Gabriella DiPietro | News Editor 07/27/2018   Not only did “Handyman Negri” bring joy to viewers through the Mister Rogers’ Neighborhood, but he impacted the lives of many students at Duquesne University. Joe Negri is […]