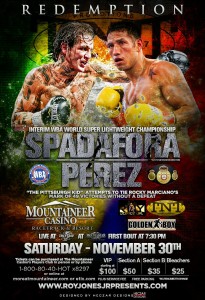 The only sound that can be heard over the crack of wood burning in the wood-burning stove that heats the room is the pit-pat of leather pounding flesh. The leather is wraped around the the fists of super lightweight Paul Spadafora and the flesh belongs to whoever his sparring partner is that day.

Spadafora, 38, has been training since his fight in April for this, the last stop before his comeback takes a drastic turn. If he wins he will be catipulted into the discussion for some megafights that could be the perfect ending to his fairytale comeback. If he loses however he could be at the end of the road. The site for his training camp, where the stove burns 24-hours a day, is Buzz Garnic Jr’s Round Two Boxing Gym. The gym isolated from humanity in California, Pa. is the perfect way for Spadafora to block out distractions.

Spadafora prefers it that way.

This bout, which will take place at The Harv, part of The Mountaineer Casino, Racetrack and Resort on November 30, is for the interim WBA super lightweight world title. The title belongs to Johan Perez (17-1-1, 12 KOs) who is eight years younger than Spadafora and two inches taller. Spadafora faces his toughest test in a decade.

Tom Yankello, head trainer for Spadafora, knows the opponent is a real test.

“I think he is a very good fighter I think that he has got a litte bit of everything. He can bang a little bit, he can box a little bit and he’s got the physical attributes,” he said.

The tough fight gives Spadafora the motivation to train even harder. His trainer is definitley noticing a difference.

Yankello says that he has never seen a better Paul Spadafora.

“I have to say I havent,” he said. “He is very focused and disciplined. I haven’t seen this in a while, if ever.”

Spadafora will be attempting to tie Rocky Marciano’s all-time recrd of 49 wins without a loss.

Yankello who has had a busy week is used to the intense pressure that come along with fight night. He worked the corner for junior welterweight Bill Hutchinson (7-1-2, 4 KOs), of Pittsburgh, on Wednesday where Hutchinson picked up a unanimous decision victory. That was only hours after a press conference for the Spadafora fight. He will also be working the corner for Morgan fitch on Saturday.

Yankello acknowledges the risky opponent, but has faith in his fighter.

“I think that Morgan is ready for that test. He is at the point in his career where he needs to step up to the next level,” he said.

Yankello is confident that Spadafora can pick up the win on Saturday and contniue his historic comeback.

“I expect a good tough fight, but, at the end of the day, craft prevails.”