As finals fast approach, an age-old conflict will soon flare up once again. As happens at the end of every semester, the divisive issue will anger some and annoy others. Before too long Gumberg Library, the main battleground for the struggle, will see debris littered far and wide, covering tabletops from the first floor to the fifth. Sure enough, the Table Wars will soon be upon us as students fight for that oh-so-precious commodity during the study season – space.

With finals comes the inevitable need for the library’s services, but unfortunately the physical building itself simply cannot handle the influx of students rushing to cram for the big test. Kelley Cotter, marketing and electronic communications librarian, said the space deficit has lead to what have been dubbed the “Table Wars.”

“Typically we have enough space to seat everyone that comes in,” Cotter said. “But the problem is that students have taken to this tradition of claiming tables by leaving belongings there even when they’re not occupying the table.”

Cotter went on to explain that two separate factions have grown out of the divide: those who are frustrated with “table hoarding,” and those who see the situation as being more a matter of survival of the fittest. Even though the former group seems to be the majority opinion based on surveys the library has done, Cotter said that the minority faction still manages to keep the tradition alive.

What the library has commonly seen with regards to table hoarding, as acting University librarian Diana Sasso said, is what is known as “staging the table.” This is the practice of coming in to the library as soon as it opens to claim a table by leaving belongings there.

“They’ll put their papers there and their markers and all that stuff and usually, but not always, things that are not really valuable … and then they don’t stay with their belongings. They leave their belongings and go,” she said.

During finals it isn’t uncommon to walk around the floors of Gumberg and see various tables with empty chairs but full tabletops. This leaves a dilemma for other students who come to use the library, as they are now forced to decide if the table really is taken or not, and if moving the belongings is appropriate. Sasso said the library can hold around 1,000 students, and with (including graduate students) about ten times that many enrolled, the problems with claiming tables become much more apparent.

Sasso also explained that this is not a recent phenomenon – the library has been experiencing this issue for at least five years now. This isn’t for a lack of effort to curb the practice on the library staff’s part either, for as long as students have been hoarding tables there have been efforts to stop them. Yet the problem has resisted eradication.

Cotter said that there has been everything from respect campaigns and case studies to statements from student organizations and “table tents.” The latter was an effort first made last semester by the library in tandem with the Student Government Association, and consisted of signs, or “tents,” on each table encouraging students to share the space. Unfortunately there were some negative, and quite visible, responses to the campaign.

“If [the signs] say ‘share your table’ it’s crossed out and will say ‘I won’t share my table,’ or something like that,” Cotter said. “So we know that there are certain students that definitely are in that one faction of saying ‘no this isn’t how it’s done, just deal with it.’”

The Gumberg staff tries to fight the issue as much as it can, but as Sasso pointed out, the situation is really in the students’ hands. The library can’t solve the space issue because there’s no room for more tables in the building. Ultimately, it’s up to students to share the space. They have to take the initiative to help out fellow classmates. The table tents were meant to help facilitate that goal by helping students make that initial interaction with one another.

“It could be awkward to go up to somebody and say, ‘Hey do you mind if I sit here?’” Sasso explained, “Just like it’s awkward to know if the stuff that’s there really belongs to someone or if it’s just sitting there, waiting until they decide to come back.”

So what happens if, even after roaming into the depths of Gumberg, no tables are available, due to hoarding or otherwise? Fortunately our campus here at Duquesne has places outside of the library that are conducive to studying.

In an email to The Duke, Cheryl Knoch, assistant president for student life, gave a few possible study locations that aren’t in the library. Obvious options include all of the lounges in the Union and academic buildings, as well as lounges in the Living Learning Centers. Also available for use are the Union Ballroom, Towers Multipurpose Room, Campus Ministry’s second floor space in Towers and the Power Center Conference Room. With nice weather finally rolling in, outside spaces are also good options for those looking for a little sun to go with their knowledge.

In the end, these Table Wars don’t seem to be ending anytime soon, despite numerous efforts to create peace among studiers. At this point it is the students’ turn to step up to the plate and show a little respect for their peers. After all, if students are going to excel during finals season they have to support each other.

“We really do care about students being successful during finals,” Cotter said. “It’s such an anxious time for everyone – there’s just a lot of stress and we want to do everything that we can to relieve that.”

The library staff is doing their part. Now it’s time for those pesky table hoarders to do the same.

Do you think students should claim tables with their belongings? 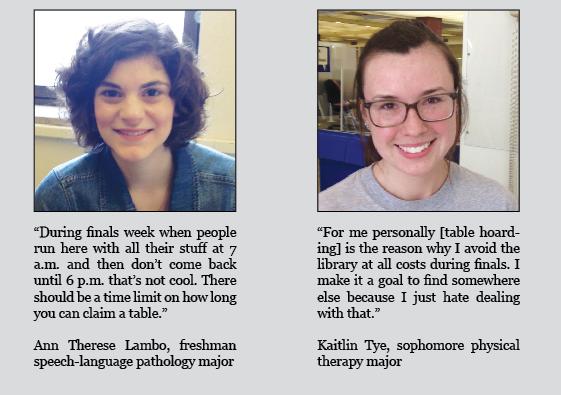 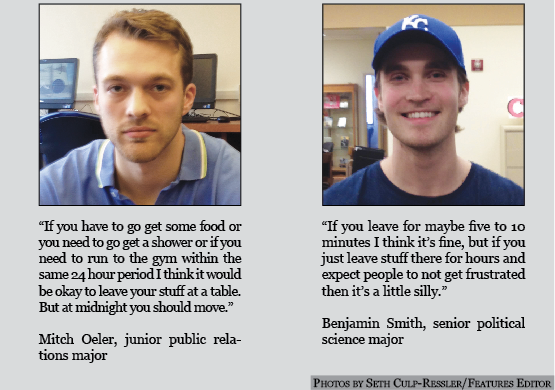 Netflix may be the source of stress, worry

March 10, 2016 The Duquesne Duke Opinions Comments Off on Netflix may be the source of stress, worry

By: Rebekah Devorak | Opinions Editor  Raise your hand if you spent spring break binge-watching the newest season of “House of Cards” from your couch, bed or anywhere in close proximity to snacks. While you […]

By Seth Culp-Ressler | Features Editor As the semester draws to a close and finals loom on the horizon, I have a suggestion for Duquesne students: Immerse yourself in the world of crossword puzzles. It’s […]