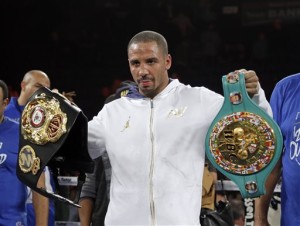 The best fighter in the world was in action on Saturday in front of a lackluster crowd and not only was it not on pay-per-view, but HBO couldn’t even find a decent undercard fight. No I’m not talking about Floyd Mayweather. I am talking about a humble kid from the streets of Oakland, Ca. I am talking about Andre Ward. He doesn’t have as high-caliber opponent as Mayweather, but that is because before he even won a championship he had cleared out the division. Ward is too small to go up to heavyweight, so he is destined to stay in the division he currently fights in. He doesn’t have the luxury of moving u weight classes to fight the so-called best. The fact that he s not on pay-per-view is ridiculous, but he will be a dominant name in the sport for years to come and he proved that on Saturday.

The only fight on HBO “World Championship Boxing” was a super middleweight matchup. Edwin Rodriguez (24-1, 16 KOs) challenged Andre Ward (27-0, 14 KOs). Because Rodriguez weighed-in two pounds over Rodriguez could not win the title and Ward could not lose it. Rodriguez has won three fights since War’s last fight, so there is no question about his work ethic. Ward is coming off of a very dangerous shoulder surgery and will need to find out how his right arm works after the procedure. Ward is a brilliant tactician and he can defend with the best of them. Watching Ward fight is like watching a pitcher throw a perfect game, only he does it every time out. Rodriguez came out aggressive and tried to throw Ward off of his game by coming at odd angles. It seems like Ward and his trainer Virgil Hunter are on another level when it comes to the mental aspect of boxing. Thirty seconds into round four the referee stopped the fight because he was hit while the fighters were in a clinch. He took two points from each fighter, implying that the next point taken would disqualify the guilty party. It was a bit extreme, but it was a good way to get a point across. The fighters were very heated and were fighting after instructed breaks. Ward was dominating Rodriguez because he was able to land hard shots without being hit. Rodriguez seemed to cool down a bit midway through the fight and landed more accurate shots, but it was not enough to win rounds against Ward. I don’t think Ward’s shoulder is at 100 percent because he seemed hesitant to throw the right hand, which would not be the case for a kid who just got their favorite toy back. Rodriguez had no answer to the skill and technical ability of Ward. In round 12 Ward cut Rodriguez with an accidental head-butt. The fight went to the cards and the judges had the fight 118-106, 117-107 and 116-108 all for Ward. Adre Ward won by dominant unanimous decision.

Boxing returned to NBC Saturday with “Fight Night” from Verona, N.Y. The main event was a heavyweight clash set for 10 rounds. Vyacheslav Glazkov (16-0-1, 11 KOs) faced Garrett Wilson (13-7-1, 7 KOs). Unfortunately Wilson had to take this fight on four days notice because the high quality opponent for Glazkov caught the flu. It is almost impossible to believe that this man would be asked to fight someone so much more talented, with so little time to prepare. To make matters worse Wilson normally fights at cruiserweight, so he had to add weight and fight a much bigger man. Wilson was aggressive early, although his lack of skill clearly showed as he was missing badly with some punches. Wilson is a tough fighter and he will not go away just from some hard punches. In round three a head-butt from Wilson cut Glazkov over his right eye. Glazkov dominated the fight his skill and reach advantage was too much for Wilson to handle. Glazkov just isn’t good enough to be real heavyweight prospect between this fight and his fight with Malik Scott he has been lackluster. I can only imagine how much he would struggle against top tier opposition. The fight went to the scorecards and the judges had it 97-93, 98-92 and 99-91 all for Glazkov. Vyacheslav Glazkov won by unanimous decision.

The first fight on NBC was a lightweight bout set for 10 rounds. Mike Brooks (10-1-1, 2 KOs) faced Karl Dargan (14-0, 7 KOs). Dargan’s defensive skills were on display early as he made Brooks miss time and time again with quick upper body movement. Dargan started to get more comfortable and landed more punches as the fight went on. Dargan has faster hands and as a result he was able to get inside of Brooks’ defense and land effective shots. Brooks was able to land a few good shots, which helped his confidence, but he could not do it with any sort of regularity. By round four Dargan’s precise counter punches had left their mark on Brooks’ face. Because Brooks could was afraid of the counters and jabs he began to leap in and try to land one shot. Once Brooks made that change he becomes even more vulnerable to the counter shots and he has less power. The punches he throws becoming more looping and slapping, they lose the crispness and strength that they had when the fight began. In round eight Brooks started to feel the urgency of the fight and he started t let his hands go. He was able to hit Dargan a little more, which helped him get some confidence. Dargan cut off any dreams of a comeback with a dominant round ten in which he wobbled Brooks s few times. The fight went the full ten rounds and was decided by the judges. The scorecards read 98-92, 99-91 and 99-91 all for Dargan. Karl Dargan won by unanimous decision.

Saturday there were three fights without a title on the line, but the actoin was still entertaining. Unfortuneatley boxing is still boxig and there were some ugly moments as well.

By Zach Landau | Editor-in-Chief 04/05/2018 Growing up, Jesus Christ Superstar was an Easter staple in the Landau household. My father had three copies of the original concept album on vinyl, and every night for […]