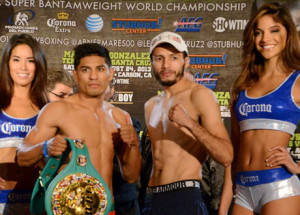 There is only one undefeated fighter at the world championship level. He is the only one for a simple reason: boxing is hard. It is very difficult to face the best and win every fight. This weekend one of the best lost for his first time.

The main event on Showtime “Championship Boxing” from Carson, Calif. was a 12 round featherweight battle. Jhonny Gonzalez (55-8, 47 KOs) attempted to capture Abner Mares’ (26-1-1, 14 KOs) WBC title.  With 30 seconds left in round one Gonzalez landed his deadly left hook that sent Mares to the canvas. Mares barely made it to his feet. Only 20 seconds later Gonzalez moved in for the kill and he succeeded. Mares went down and before he could even start to get back up the referee stopped the fight. Jhonny Gonzalez won by knockout at 2:55 of the first round. Abner Mares is a tremendous champion and he has the talent to beat Gonzalez. Gonzalez has tremendous power, but there are questions about his ability to fight at a high level over the course of 12 rounds. Mares doesn’t need to prove anything to anyone because he has fought maybe he toughest schedule in the last three years. We will see great things from Mares in the coming years.

The first bout on Showtime was a super bantamweight fight set for 12 rounds. Leo Santa Cruz (25-0-1, 15 KOs) challenged Victor Terrazas (37-3-1, 21 KOs) for Terrazas’ WBC title. This was a classic war. Both fighters were trading punches as the punch totals escalated at an alarming pace. Santa Cruz was landing more, better, harder punches from the outset. Both fighters used the body well. After only the second round Terrazas’ right eye was almost swollen shut. With a minute and a half left n round three Santa Cruz landed a big left hook that dropped Terrazas. He got back up at 8, but was back down 30 seconds later from a Santa Cruz right hook. Terrazas made it to his feet but as he spoke with the referee he could not prove he was fit to continue. Reportedly the referee stopped the fight because Terrazas could not see through his right eye. Leo Santa Cruz won by knockout at 2:09 of round three.

The main event on ESPN2 “Friday Night Fights” from Verona, N.Y. was a junior lightweight matchup. Argenis Mendez (21-3, 11 KOs) faced Arash Usmanee (21-1, 10 KOs) for Mendez’s IBF Title. Usmanee had success working inside early. After Mendez found his range he started to land his accurate counterpunches. As Mendez started to land strong counterpunches Usmanee started to float further away from Mendez. Mendez the taller fighter was then in range while Usmanee had moved out of range to land his punches. Usmanee was much more active, but Mendez was able to defend a lot of the punches Usmanee threw. Usmanee was never afraid to get hit and came forward and threw more punches for the entire fight. The fight went to the judges’ scorecards, which read 115-113 Usmanee, 114-114 and 114-114. Arash Usmanee won by majority decision. The fight should have gone to Mendez, but as previously stated a counterpuncher can have difficulty getting decisions. Should Mendez have won this fight? Probably, especially considering it was his title, but Usmanee was aggressive and fought like a warrior.

Even the best boxers have ups and downs in their career. Only sometimes do they come in the form of a loss. The fact that Mares lost this fight is ok. It allows him to learn and improve it also gives Leo Santa Cruz time to work his way up to Mares’ weight. When those two fight it could become an instant classic that fight fans will talk about for years. This card did what it was supposed to do, it made fight fans salivate for a Santa Cruz-Mares mega-fight.

by Luke Henne | sports editor March 24, 2022 John Clayton, one of the most distinguished alumni of Duquesne University’s media department, died on Friday at the age of 67 in Bellevue, Wash., following a […]