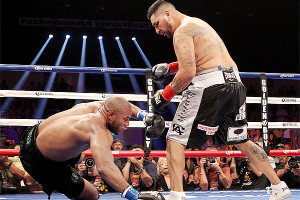 The steady decline of boxing began when the major American heavyweights had been dispatched for the top tier of the division. Since Mike Tyson stopped boxing fight fans have been yearning for a great American heavyweight. All of the potential champions seem to be doing other things that don’t require them to get concussions on purpose (or at least not as many, NFL I’m looking at you). So is there a chance that an American heavyweight could climb the division and recapture the interest of sports fans? The best chance to find out came on Saturday.

The main event on Showtime “Boxing – Special Edition” from Indio, California Saturday was a heavyweight fight set for 12 rounds. Seth Mitchell (26-2-1, 19 KOs) faced Chris Arreola (35-3-0-1, 31 KOs) for Mitchell’s WBC title. Arreola was a fast-rising prospect in the heavyweight division, but a loss to Vitali Klitschko combined with poor preparation for his ensuing fights led to Arreola’s spiral that culminated with his most recent fight against Bermane Stiverne when he was strategically destroyed. For Mitchell it was supposed to the fast track to a title reign. The problem for Mitchell, who came from a football background, is that he is not used to being punched in the face and when he gets hit he goes down. Mitchell has thunderous power, but his defense is not there yet. The first round started off with Arreola chasing down Mitchell. Once Arreola caught up to Mitchell he started to land extremely hard shots that hurt Mitchell. Mitchell was hurt with about two minutes remaining in the opening stanza and Arreola pushed him to the canvas. Strategically it was a mistake because it allowed Mitchell to recover. About a minute later Arreola dropped Mitchell and Mitchell got to his feet, but could not hold Arreola to slow the attack. With about 30 seconds left Arreola was punishing Mitchell and the referee Jack Reiss stepped in and stopped the fight. Chris Arreola won by technical knockout at 2:26 of the first round.

The first fight on Showtime was a 10-round featherweight bout. Rafael Marquez (41-9, 37 KOs) faced Efrain Esquivias (17-2-1, 10 KOs). Marquez was calm and composed, landing good shots early. Esquivias was cut in round one above the left eye form a punch. Esquivias figured out rapidly that the right counter was available to him without repercussion. Once he started to repeatedly land it the fight evened out as both fighters hammered away. Midway through the fight Esquivias started to walk down Marquez, throw more combinations and gain an advantage.  Marquez is an old-school Mexican fighter, with an emphasis on the old part. He was able to absorb absurd amounts of punishment and continue to come towards his opponent, but he doesn’t have the power he used to have. Marquez tried to rally at the end of round seven, but Esquivias came out strong for round eight and stymied any possible comeback. At the beginnings of round nine Esquivias landed the same counter right and it dropped Marquez. Marquez got to his feet, but was still shaky on his feet. The referee stopped the fight when he saw Marquez was not going to recover. Efrain Esquivias won by technical knockout at :19 of round nine. Rafael Marquez said after the fight that he would have to think about whether or not to retire. Going back to the idea of intentional concussions I see no reason for Marquez to continue fighting because he will never hold another title, he has had a great career and he has lost a lot of the abilities he had that made him great. If this is the end for Marquez he has had an amazing career and he is yet another legendary Mexican boxer.

The question of whether or not heavyweights can capture the attention of sports fans was only partially answered. Arreola is good fighter with a superstar personality. It is unclear whether he can make it back to the top and whether he can compete at that level. Mitchell winning would have meant a lot more for the heavyweight division. Luckily, the smaller guys decided they needed to step up and make mega-fights to keep the sport alive. We have evidence of that, as the sports world will be fully focused on boxing next Saturday, as the undefeated Floyd Mayweather will face his best competition in years in Saul “Canelo” Alvarez. This is can’t-miss action, but if you are unable to catch the fight make sure you check the Red Corner next week for my recap.

Warren on the Way to the Top

September 3, 2013 The Duquesne Duke Sports Comments Off on Warren on the Way to the Top

Saúl Berríos-Thomas     There are some prospects that are clearly ready for the big time and then there are some who need much more polish before they take the next step. Alan Sanchez and […]