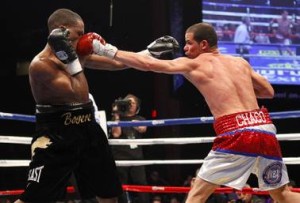 Each boxing match is very different. On Saturday there were two very different fights, but both were extremely entertaining. There was a complete domination with some of the best technique you will see and there was a very competitive brawl that could have gone either way. Which one is better? You decide.

The main event on Showtime from Las Vegas was a lightweight title bout. Sharif Bogere (23-1, 15 KOs) challenged Richar Abril (18-3-1, 8 KOs) for his title. Both fighters came out quick and tried to gain control the fight. Bogere tackled Abril twice early in the fight. Both fighters were throwing a lot of wild punches, but not a lot of good shots were landing early. In round four a small cut open up above Abril’s left eye. The fight was being fought at a pace and distance that favored Bogere. In round six another head-butt caused a second cut on Abril this one was more serious and above his right eye. Bogere appeared to have a slight edge early in the fight, but it was very close. In round eight the referee called timeout and took a point form Abril for holding. Abril started to comeback in round seven and gained control of the fight as Bogere appeared to be tiring. Abril was able to land more punches and more effective punches. In round twelve the action was stopped and the referee took a point away from Bogere. The fight was very lose and all the way up until the end both fighters gave it everything they had. The fight went to the judges’ scorecards where they had it 115-111, 116-110 and 116-110 all for Abril. Richar Abril won a very tough unanimous decision.

The first fight on Showtime was a featherweight fight. Gary Russell Jr. (22-0, 13 KOs) fought Vyacheslav Gusev (20-3, 5 KOs). Russell controls the fight with his lightning fast jab and sets up his extremely powerful right hand. Russell also utilizes a good body attack and strong defense. At the end of round one Russell connected with one of his powerful rights and stunned Gusev, but the bell rang before he could follow up. The problem Gusev faced was an impossible one: he either had to get aggressive to try to score points, which would open him up for counters from Russell’s amazing speed, or Gusev could lay back and defend, but he would never win a decision and he would still get hit because Russell is that good. Halfway through round three just as Gusev landed his best combination of the fight he was countered by a Russell right hook that forced Gusev’s glove to touch the canvas. Gusev was able to fight through to the end of the round. By round four Gusev’s face was already showing damage, and most of that damage was just form Russell jabs. Russell appeared reluctant to use his left hand from round six on. After round eight the corner called timeout so they could give him a new glove because the lacing in his old glove had torn. Even after the glove was replaced Russell was still reluctant to use his left hand, which suggests his left hand was hurt. Russell has struggled with tender hands throughout his career, which stems from his amateur days when he broke both of his hands. That could be part of the reason he hasn’t moved up in competition faster or been more active. The fight went to the scorecards where the judges scored the fight 100-89, 100-89 and 100-89 all for Russell. Gary Russell Jr. won by unanimous decision. Gary Russell Jr. won the last four or five rounds with one hand that tells you everything you need to know about his potential.

The main event on ESPN2 “Friday Night Fights” was a featherweight title bout. Billy Dib (35-2-0-1, 21 KOs) faced Evgeny Gradovich (16-0, 8 KOs). Gradovich took the fight on about a month’s notice. Gradovich came out strong early to show that, even though he was the challenger and the underdog, he was there for a fight. Dib suffered a cut on the side of his head in round four. It was a back and fourth fight in which both fighters had good moments and bad ones. The fight was competitive, but Gradovich was obviously scoring more and doing more damage. In round eight the referee decided to take a point away from Gradovich for holding. Then, a minute later he stopped the fight again and took a point away from Dib for holding. Dib was trying to fight back, but he just didn’t see to have an adjustment in him. Gradovich was able to do everything he needed to pull off the upset. The fight went to the scorecards. The judges had the fight scored 114-112 Dib, 114-112 Gradovich and 114-112 Gradovich. Evgeny Gradovich won the title by split decision.

The co-main event on ESPN2 was a junior middleweight matchup. Willie Nelson (20-1-1, 12 KOs) faced Michael Medina (26-4-2, 19 KOs). Midway through the first round a well-timed counter right dropped Medina. Medina got back up, but was dropped seconds later by a right hook. It appeared as though Medina went down due to an injury to his leg and not the affect of the punch. This may have been a sufficient reason for a no decision, but the referee decided instead to declare it a knockout. Willie Nelson won by technical knockout.

The first fight on ESPN2 featured the pro debut of one junior welterweight. Luis Olivares (1-0, 1 KOs) faced Rafael Munoz (1-2). A minute into round one a counter left from Olivares dropped Munoz. Munoz got himself off of the canvas, but only a minute later was dropped by another left hook. Muniz got back up a second time, but the referee took one look at him and called a stop to the bout. Luis Olivares won by knockout in his pro debut.

Sometimes, championships are won by a younger, more skilled fighter, and sometimes a cagey veteran retains his title with his experience. This weekend we had both of these outcomes and both times the fight was entertaining throughout.

October 22, 2015 The Duquesne Duke Arts & Entertainment Comments Off on The Game brings no game to new album

By Jacob Guerra | The Duquesne Duke The Game is no stranger to featuring well-known artists in an effort to hype his work. This practice goes all the way back to his 2005 debut studio […]

May 6, 2013 The Duquesne Duke Sports Comments Off on Mayweather Still Unbeatable

By Saúl Berríos-Thomas     Floyd Mayweather Jr. is arrogant. He is annoying. He is entertaining. He is funny. But more than any of that he is an extremely hard worker. What Mayweather puts his […]