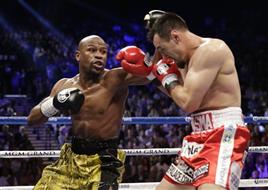 Floyd Mayweather Jr. is arrogant. He is annoying. He is entertaining. He is funny. But more than any of that he is an extremely hard worker. What Mayweather puts his body through during his grueling training camps is above and beyond anything that anyone in any sport does. He is the best because of a combination of great natural born talent and an extremely strong work ethic. He has worked his entire life to perfect his craft and he has.

The main event on the Showtime PPV “MayDay” was a 12 round welterweight clash. Floyd Mayweather Jr. (44-0, 26 KOs) fought Robert Guerrero (31-2-1-2, 18 KOs). Guerrero got off to a good start landing good body punches and catching Mayweather when he was given an opening. Guerrero was intent on making it a rough fight and bothering Mayweather in close. Guerrero was countering the counter-puncher very well early. In baseball when a rookie comes up to the majors they often have success based on the ignorance the opponents have to their skill set. Then the league makes an adjustment to the rookie and it becomes the rookie’s responsibility to make an adjustment to the way they are being approached. This can take two or three season to play out in baseball, but in this fight it took Mayweather four rounds to make the adjustment, which is why he is the best in the world. After Mayweather made an adjustment, and it was a very subtle adjustment, Guerrero had no answer. The adjustment Mayweather made was to use his footwork more effectively to escape when Guerrero moved in to clinch and bang inside. Within the first minute of round five Mayweather clearly injured his right hand and in the second minute of the round he only threw it about five times. Mayweather regained his confidence after the injury and used the right hand even though it seemed like every time he punched it sent pain shooting up his arm. Mayweather settled in and took control of the fight. Each round Guerrero was less willing to throw punches because he got countered almost every time. Mayweather is efficient with his punches. He lands at one of the highest percentages in boxing history. As the fight got closer to the end it as clear that Mayweather was winning the fight and Guerrero was not going to be able to stop Mayweather. The fight went all 12 rounds. The judges scored the fight 117-111, 117-111 and 117-11 all for Mayweather. Floyd Mayweather Jr. won by unanimous decision and defended his undefeated record.

The co-main event was a featherweight fight scheduled for 12 rounds. Abner Mares (26-0-1, 14 KOs) faced Daniel Ponce de Leon (44-5, 35 KOs). With Ponce de Leon’s vicious left always present Mares was careful early making sure to stay out of range. It was Mares’ power that showed up first though. With less than ten seconds remaining in round two Mares landed a left hook followed by a right hook and the combination sent Ponce de Leon down. Ponce de Leon made it out of the round, but was clearly rattled. Mares has great speed and was using every punch he has in his repertoire effectively in this fight. Ponce de Leon was landing good shots and hurting Mares, the problem was Mares was landing more each round and not allowing Ponce de Leon to win a single round. With a minute remaining in round nine Mares connected with a right hook that put Ponce de Leon on his back. Ponce de Leon was in trouble, but he made it back to his feet. Mares moved in and attacked Ponce de Leon. As Mares got Ponce de Leon against the ropes he landed right hook after right hook. The referee stepped in and called a stop to the fight. There was some thought that the stoppage was premature. Mares was ahead by a very wide margin on the cards, Mares had just dropped Ponce de Leon and Mares was slugging Ponce de Leon with a series of right hands. However, Ponce de Leon was defending himself and fighting back and the point of stopping the fight is not to determine who should win the fight, rather it is to protect a fighter if they are in a dangerous situation. Ponce de Leon was not in danger and the fight probably could have continued, but Mares was going to win this fight no matter what, so it really doesn’t matter that much. Abner Mares won the fight by knockout in round nine. Mares has battled through weight class after weight class and collected belts all along the way. He is one of the best small fighters in the world and deserves the recognition he has received.

The next fight was a 10 round junior featherweight matchup. Leo Santa Cruz (24-0-1, 14 KOs) faced Alexander Munoz (36-5, 28 KOs). Santa Cruz is a fierce fighter who almost always throws 100 punches-per-round and has one of the best body attacks in all of boxing. Munoz was willing to stand there and battle with Santa Cruz. The action was very close in the first two rounds, but by round three Munoz was worn out by Santa Cruz’s body work and punishing pace. This was Santa Cruz’s first fight at 122-pounds and he appeared to be adding the weight well. Santa Cruz worked hard leading up to this fight to improve his defense. While his defense was better he went away from it at times, desperate to give the crowd a knockout. With 30 seconds left in round three Santa Cruz caught Munoz with a big flurry of punches and the effect of all the hooks forced Munoz down to the canvas. Munoz recovered and made it out of the round, but was clearly depleted. With two minutes left in round five Santa Cruz landed a strong left hook that knocked Munoz down again. Munoz got to his feet, but his corner was already in the process of stopping the fight. Leo Santa Cruz won by knockout in round five.

The first fight on Showtime was a 10 round middleweight bout. J’Leon Love (16-0, 8 KOs) went up against Gabriel Rosado (21-7, 13 KOs). Love has the faster hands and the better technique, but Rosado has the better punching power. Love was able to use his jab to set up the pace of the action. Both fighters were aggressive and the fight was very close. As the fight went on Love started to gain a small advantage in scoring. Love was hurt a few times, but was able to avoid any major damage early because of his quick feet and well-timed clinching. With just under 10 seconds remaining in round six Rosado finally connected with a strong straight right hand and it knocked Love down. Love got back up and was very fortunate to almost immediately hear the bell ending the round. Love rallied from the knockdown and recovered from a lull in the middle rounds. The fight appeared to still be up for grabs in round ten. Love did more in that round to earn the win, while Rosado did not seem to have the intensity he needed to win a close decision as the underdog. The fight went to the judges and they scored the fight 95-94 Rosado, 97-92 Love and 95-94 Love. J’Leon Love won a very close fight by split decision. This was a good close fight and a rematch would be even more exciting.

Watching someone who is the best at what they do is always entertaining. When you get to watch three people who are great at what they do that is something special. Four great fights with five or six great fighters goes a long way towards rebuilding the sport of boxing.

By Saúl Berríos-Thomas     A man who knows more about boxing than almost anyone else in the game is very hard to beat. Bernard Hopkins knows more than that man. Hopkins fought his first […]

Joseph Sykes | Assistant Sports Editor Floyd Mayweather and Manny Pacquiao are arguably the two best pound-for-pound fighters in the world, so it’s fitting that this weekend’s bout between the boxing megastars is already one […]