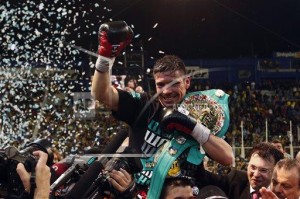 Age is the worst opponent any fighter has to face. Two fighters were notably depleted in this week’s action one was able to overcome and get the victory, the other was slowly brutally destroyed in the ring.

The main event on HBO “World Championship Boxing” from Buenos Aires, Argentina was a middleweight battle. Sergio Martinez (51-2-2, 28 KOs) took on Martin Murray (25-1-1, 11 KOs). Murray was very cautious early, knowing that Martinez’s power is remarkable. Murray was able to hit Martinez at times and he was able to land some hard shots, but he lacks finishing power. Murray stepped up the pace after round four, which showed that Martinez even since his most recent fight last year has slowed a significant amount. His reaction time has slowed and he is not able to evade the punches he once could. Martinez was cut just outside his left eye in round six. Martinez was struggling through the middle rounds as he often does, but he usually is able to find his way later in the fight. With one and a half minutes remaining in round eight Murray landed a strong left hand that knocked down Martinez. Martinez recovered quickly, but was still unwilling to raise his hands to defend. Martinez often fights with his hands down, but he was not defending punches the way he normally does in that stance. After round 11 Martinez told his corner that his left hand was hurt. Martinez won the last two rounds clearly and those two rounds made a huge difference in the decision. The fight went to the scorecards and the judges scored the fight 115-112, 115-112 and 115-112 all for Martinez. Sergio Martinez won the fight by unanimous decision.

The main event on HBO from Ontario, California was a heavyweight clash. Chris Arreola (34-3-0-1, 30 KOs) squared off against Bermane Stiverne (23-1-1, 20 KOs). Both men were throwing hard punches, but Stiverne looked a little tight as if he hadn’t warmed up as much as he should have. With just a few seconds left in round three Stiverne landed a strong right hook that sent Arreola to the canvas as blood started to pour from his nose. Arreola got up and the bell sounded to end the round. Stiverne gained control of the fight after the knockdown and Arreola struggled to recover. Stiverne started to break Arreola apart, but Arreola is a gutsy fighter who doesn’t ever quit. When Arreola had his best round in round nine he landed his best punches, but Stiverne was unaffected. Arreola was drained and Stiverne was able to avoid every punch Arreola threw. Arreola was completely ineffective after the knockdown. In round 12 Arreola came out with everything he had left and immediately got cut over the left eye. Arreola could do nothing through the bloody mask and was battered by Stiverne. Arreola was exhausted in round 12 and even though he endured do much punishment and lost so much blood it seemed like his conditioning was not good enough to withstand 12 rounds. He likes to weigh-in around 230-pounds, but for this fight he was close to 250. The fight went to the card where the judges had it 117-110, 117-110 and 118-109 all for Stiverne. Bermane Stiverne won by unanimous decision.

The main event on Showtime “Championship Boxing” on Saturday from Brooklyn, New York was a light welterweight fight. Zab Judah (42-8-0-2, 29 KOs) challenged Danny Garcia (26-0, 16 KOs). The fight went at a slower pace early as both fighters tried to find the perfect distance. Garcia was doing well to keep Judah off of him, especially because Garcia was throwing his right hand from unexpected angles causing Judah to play much more defense hen he would have liked to. Garcia was always able to come right back with his punches whenever Judah landed his somewhat predictable left hand. In round five Garcia landed a right that stunned Judah, but the savvy veteran was able to clinch his way out of the round. In the next round Garcia attacked with vigor, but Judah was able to hold onto Garcia and prevent Garcia’s offense from flowing. Halfway through round eight Garcia threw a right that literally sent Judah flying across the ring and onto his back. Judah got back up, but the punch opened a second cut on Judah, this one a large gash under the left eye. In round ten Judah stormed out and landed several great punches. Garcia appeared to give up on offense and simply try to cover up. In round 11 Judah was still in control, but it didn’t appear as though he would be able to knockdown Garcia. Garcia was well in front on the scorecards, which meant that Judah could do nothing to change the outcome. After a second head-butt both fighters had blood flowing down their faces, but neither man gave up. After the fight both men embraced, their moments of animosity leading up to the fight were long forgotten. The fight went to the scorecards where the judges scored the fight 115-112, 114-112 and 116-111 all for Garcia. Danny Garcia won by unanimous decision.

The first fight on Showtime was a middleweight matchup. Peter Quillin (29-0, 21 KOs) took on Fernando Guerrero (25-2, 19 KOs). Quillin is a very skilled champion and he utilized his excellent jab in the early rounds to find his range and figure out his angles against the tough southpaw. With a minute and a half remaining in round two Quillin rocked Guerrero with an audibly viscous right hand that sent Guerrero down. Guerrero went back down almost twenty seconds later, but did an excellent job of escaping the danger and surviving the round. Quillin fell in love with his power and abandoned his plan and his jab, instead searching for the one punch finisher. Guerrero was unable to capitalize though because he couldn’t distract Quillin with anything on his way in. In round six Guerrero finally began to hit Quillin because he was the busier fighter in that round. In round seven Quillin landed a right uppercut followed by a straight right hand that caused Guerrero’s glove to touch the canvas, when the referee resumed the action Quillin pounced and in the blink of an eye he had landed the straight right hand yet again to finally finish Guerrero’s night. Peter Quillin won by seventh round knockout. Quillin is probably already the best American middleweight and his stock continues to rise with this win.

The main event on the Showtime “Special Edition” from England was a welterweight contest. Amir Khan (28-3, 19 KOs) faced Julio Diaz (40-8-1, 29 KOs). Khan is hard to outscore because he throws so many punches and he has very fast hands and feet, but between a very soft chin and an absence of elite power he can get into trouble unless he completely shuts out his opponent. Khan has really improved his jab since switching to his new trainer Virgil Hunter and was able to use it with success against Diaz. With one minute and 15 seconds remaining in round four Diaz landed a left hook that dropped Khan. Khan was able to get back up and didn’t appear to be in too much distress. Khan responded well in the following round and appeared to be unaffected by the knockdown. Khan was clearly in control for the majority of the fight, but the fight shifted when Diaz had a solid round in round nine. In rounds 10 and 11 Diaz seemed to gain momentum, but he was still trailing on the scorecards. The fight went to the scorecards after a very close round 12. The judges scored the fight 114-113, 115-113 and 115-112 all for Khan. Amir Khan won the fight by a unanimous decision. Khan didn’t do a great job of convincing anyone that he needs to be in the conversation with the best in the word at 140-pounds. He is however a skilled fighter that will be interesting to follow.