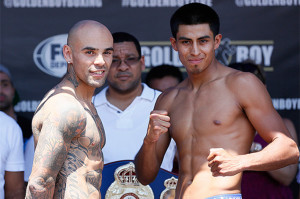 There are some prospects that are clearly ready for the big time and then there are some who need much more polish before they take the next step. Alan Sanchez and Rau’shee Warren both need more fine tuning before they face elite level competition. The good thing for them is that they are both very young and they have plenty of time to get there.

The main event on Fox Sports 1 “Monday Night Boxing” was a 10 round welterweight match. Alan Sanchez (12-2-1, 6 KOs) faced Luis Collazo (33-5, 17 KOs) for the vacant WBA title. Sanchez was very tentative early, respecting Collazo’s experience. Collazo’s early work to the body tired Sanchez quickly and when Sanchez slowed Collazo was able to put more punches together. For Sanchez this fight would determine whether he could maintain his position as a prospect or not. Sanchez has the raw tolls, but it seems like they have not been improved upon since he turned professional. Collazo was able to pick apart Sanchez and Sanchez had no answer. Collazo coasted to an easy victory in what was supposed to be a make-or-break fight for both. The fight went to the scorecards and the judges scored the bout 99-91, 98-92 and 97-93 all for Collazo. Luis Collazo won by unanimous decision.

The first fight was a super bantamweight fight set for six rounds. Rau’shee Warren (15-0, 3 KOs) faced Omar Gonzales (6-9, 1 KO). Warren, the three-time Olympian, is a highly touted prospect, but in this fight it was clear from the outset why he needs more fights. He still has a lot to learn and he can only learn in the ring. Warren’s defense is shaky at best. He tends to get rigid and robotic when he has to defend on the inside. Warren rarely goes to the body, which is not great for a boxer who has as little power as Warren does. Warren is still an elite prospect and mostly that is because he has unbelievable speed. His hands might be some of the fastest in all of boxing. Warren score to knockdowns early in round one. They were the result of Warren’s speed, which caught Gonzales off guard. From then on Warren mostly just coasted to an easy victory. His speed and technical ability on offense are enough to win him rounds at this level. With 30 seconds left in round five Warren cornered Gonzales and connected with a vicious combination that dropped Gonzales. Gonzales quickly recovered and escaped the round. Gonzales was dropped twice in the final round, but was never in serious danger. The fight went to the scorecards where the judges had it 60-49, 60-49 and 60-51 all for Warren. Rau’shee Warren won by unanimous decision.

The lull in boxing is coming to an end very soon as some of the best fights in a few years are all scheduled for the end of this year. With Mayweather’s and Pacquiao’s lacing up the gloves boxing is about to get really good.

AP Photo—Luis Collazo, left, and Alan Sanchez, right, square off in preparation for a 10 round welterweight match Monday in San Antonio.