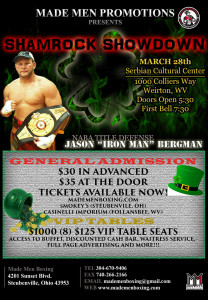 Seven four-round fights means youth and potential. That was on display at the Serbian American Cultural Center. The fighters who put their potential on display showed why they are ready for the next step, or why they need to do more work before they step up.

Vargas was quick on his feet trying to avoid the exchanges. Bergman was more physical wearing down Vargas. Bergman was landing more punches, while Vargas was initiating clinches. In round two Bergman landed a big right hook that dropped Vargas. Vargas got back up, but was bleeding heavily from his nose. Vargas made it to the end of the round, but did so on wobbly legs. In the third round Bergman backed Vargas into the corner and started landing several punches. Vargas was not protecting himself and his head was getting rocked back. At that point the referee stepped in and stopped the fight. The stoppage my have been a little early, but Bergman had been able to land punches all round and Vargas could do nothing to stop it. Vargas was no longer able to protect himself and was on the verge of taking another bad fall. Also it could easily be argued that the ropes held Vargas up while he was getting punched on the ropes.

Latimore came out very aggressive and put his power on display. He worked the body well and baked up Williams. When he got Williams in the corner he let his hands go. It took one flurry of five unanswered punches to finish Williams who was down for a while after the knockout. A vicious right hook was the one that slumped Williams and finished the fight.

Latimore was happy to be back in action after the long layoff.

“It had almost been a year since my last fight because I left for basic training in the National Guard. My last fight was April 20. This fight was god because now I can start moving in the right direction,” he said.

Latimore wanted to get the fight done early.

“That is the best part of the job. Whether I go home early or I stay late I get paid the same. The rounds are just a marker for the increments of difficulty. If you are that far ahead sometimes it doesn’t matter,” he said.

He was not concerned with tiring when he moved in for the knockout.

“If you throw the punches correctly you are not wasting energy. It is all about efficiency of movement. I work very hard on that and with being relaxed and hitting. I could have stayed in that corner all day as long as I made sure I paced myself and breathed correctly. What I am really thinking when I have a guy in the corner is how can I get his hands down. Or how can I get him to think about his head, so that I can go to the bottom. In this case he was more concerned with protecting his head, then his body. I was able to hurt his body and that led to the head,” Latimore explained.

McPherson was the aggressor, while Givhan looked to counter. McPherson controlled much of the first round, but when Givhan landed it was clear his punches were much harder. In the second wound Givhan threw more punches and the impact was immediate. He broke down McPherson and at the end of the round he scored a knockdown on body punches. McPherson tired in the final two rounds and became an easy target for Givhan. Givhan landed his combinations behind a decent jab that did enough to bother McPherson.

Augustin showed a very calm demeanor against a wild fighter. When they got close Williamson would flail his arms and look to trip Augustin. When Augustin was able to punch he would land hard and hurt Williamson. Williamson had awful footwork and was loading up on his punches. Augustin used this to take advantage in exchanges and land punches that weren’t blocked. Augustin had trouble with the awkward style that Williamson had, which caused the fight to be dragged out despite a clear talent disadvantage. Augustin controlled the action and fought through the tough test, although he will need to learn from this fight because Williamson’s style is not unbreakable and a fighter as talented as Augustin should be able to do more in this fight.

Fredrickson is quick, but he was matched against an opponent with similar speed. Ogden was running the whole fight, trying to avoid taking punches. Fredrickson adjusted well and capitalized when he had the chance. Fredrickson scored a knockdown at the very end of round one. While Ogden didn’t look seriously hurt he indicated to the referee that he could not continue. The circumstances surrounding the stoppage were odd. Fredrickson’s corner seemed upset at what looked like a fighter quitting at the first sign of danger.

Hartley was aggressive trying to overcome the huge disadvantage in size. In the first round a body shot dropped Hartley, but he made it back to his feet quickly and didn’t show serious signs of pain. Pappas, who is a trainer, showed good technical skills and broke down Hartley quickly. Hartley was wild, but quick and elusive. Pappas dominated and in the second round got Hartley in the corner and finished him with three straight body shots.

Harris is quick and his punches made an impact every time they landed. Dave was evasive and was ale to avoid trouble early. Harris put forth a good defensive effort and avoided many of Dave’s punches. In the first round Dave hurt his left arm blocking a punch. In round two Harris was doing major damage and hurting Dave. Dave indicated he could not continue due to the pain in his arm.

The key to faster vaccine distribution may lie at independent pharmacies

February 11, 2021 The Duquesne Duke Opinions Comments Off on The key to faster vaccine distribution may lie at independent pharmacies

02/11/2021 Mohammad Sajjad | Staff Columnist My mother recently asked me to help her find a location where she could receive the COVID-19 vaccine. Not being tech savvy, she sent me a link a friend […]

Warren on the Way to the Top

September 3, 2013 The Duquesne Duke Sports Comments Off on Warren on the Way to the Top

Saúl Berríos-Thomas     There are some prospects that are clearly ready for the big time and then there are some who need much more polish before they take the next step. Alan Sanchez and […]