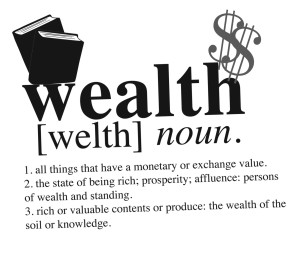 Much of what citizens are hearing, watching and being subjected to is geared toward a reinforcement of motivations to gain material wealth. This particular view of what it means to be a wealthy person should be slightly altered to include unquantifiable characteristics, too.

A truly wealthy person should also be recognized for abstract, nonmaterial possessions such as intelligence, knowledge, skills of different sorts, creativity, motivation, even personal strength and a favorable personality, among others.

There is absolutely no problem with the pursuit of money—in fact, it is almost always necessary to do so if a person wants to function successfully within and be a part of the national and global marketplace. Materials provide comfort and nourishment, and everyone wants a life without the worry of discomfort and struggle.

This type of wealth is given massive attention in American society and sets the tone for how riches are pursued. Media is a vital part of how such attitudes are reinforced in a culture.

Material wealth is endlessly glorified and encouraged in television, music, marketing ads, and many other areas of the sweeping media landscape. Massively popular television shows like Breaking Bad depict scenarios of money worship. The same goes with pop and hip-hop artists.

If a citizenship can recognize the goal or artistry of these campaigns, instead of simply absorbing, it can successfully become aware of how it is targeted as a money-maker instead of an important body of people worthy of care. This awareness is necessary to change the consensus on what it means to be wealthy.

What should be considered in effect is a flaw in is the strict adherence to “wealth” as meaning only material and monetary abundance. I believe we’ve lost the well-rounded definition of the word, and that loss has affected our goals in relation to that word. After all, our idea of and stance on a concept directly affects the manner in which we pursue it.

Recently, it has become clear just how quickly the monetary system can be damaged, and in turn, affect our well-being. This system is held up by our consensus to participate in it and by the resources that we have to supplement it. If resources and services of different kinds begin to suffer and the economic system wilts, those that have actual skills may be better off in the long run than those that have a large money supply.

Still vital, this supply should not be the lone determinant of the strength of a people. A truly healthy and abundant society has a citizenship that is characterized as being well versed in resource use as well as labor and mental capabilities. This is so because the ability to help sustain oneself always creates the possibility for economic system running more smoothly.

The unquantifiable factors mentioned above are just as important as their opposite—maybe even more so than the distinctly quantifiable.  This is where skill and abstract possessions come in concerning wealth—Human Capacity, or Human Capital, can be measured as value just as material and monetary abundance are measured.

These factors which are difficult to compare with material wealth can be a plethora of character traits or skills. Kindness and pleasantness are more valuable than material things in certain instances. Sometimes a smile and positivity will go farther than having a thick wallet. Wealth in happiness and good friends and family can be more important and pleasurable as well when compared to materials and currency.

The factors mentioned above can, especially in the initial portion of a young person’s life, be more important than material abundance. The reasons for this extreme importance are simple: a successful career path and life can be better built upon these foundations rather than a materialistic foundation. This is a modern-day encouragement of a type of self-reliance.

Simply possessing the ability to create something or produce one’s own materials is a major quality of a truly wealth person. Those who can replace their own material loss with the use of their own skills and the resources around them will undoubtedly prosper if such a flawed system should collapse—the ultimate self-reliance. This same idea can also be translated in terms of a collective wealth rather than just an individual one.

Collective wealth is not to be confused with the socialist concept of a distributed, fixed income for citizens. Collective wealth—a nation that is well educated, thoroughly skilled, and knowledgeable about the resources available to them—at its base, is going to be stronger than a country with a small, rich percentage fueling the economy with monetary credit.

Capri Scarcelli | A&E Editor 8/26/21 Oh my Lorde: Lorde is back and better than ever. For the first time in four years, Lorde gave herself the “green light” for producing new music since her […]

By Jen Cardone | The Duquesne Duke The Mary Pappert School of Music was recently named one of the top 58 schools for music education in the country in the new edition of Creative Colleges: […]

April 4, 2019 The Duquesne Duke Arts & Entertainment Comments Off on A Little Night Music is a Red Masquers masterpiece

Josiah Martin | A&E Editor 04/04/19 Admittedly, apart from “Send in the Clowns,” I knew very little about Stephen Sondheim’s A Little Night Music going into the Red Masquers’ production this week. In a way, […]