Just 24 hours after dropping his first major label release, Mac Miller is certain he won’t drop anything else soon.

Especially not in a softball game against his own fans on a field just minutes away from his recording studio in Lawrenceville.

So when a ball is hit his way, Mac – sporting a custom green-and-white jersey with his real last name, “McCormick,” on the back – lunges forward to make an acrobatic catch.

“I think I might have pulled something,” Mac laughs as he jogs back to the dugout. “Alright, who’s up next?”

In the world of hip-hop, Mac is up next. The 23-year-old was one of the most decorated independent artists of the decade before signing with Warner Bros. Records in 2014. Now he’s a superstar, and his new album, “GO:OD AM,” is destined for critical success.

But this past weekend, Mac could be found on softball fields and in bowling alleys and basements across Pittsburgh. His “Homecoming Weekend” – in celebration of the album release Friday – touted several events that gave fans the chance to interact with Mac before he left on his 55-city North American tour.

The next day, Mac laced up his bowling shoes and took to Arsenal Lanes in Lawrenceville for a tournament. His team – made up of members from his REMember Music label – won convincingly in the championship bout, thanks to a few strikes from the artist himself.

On the day of the “GO:OD AM” release, Mac chatted and took pictures with fans in his pop-up shop at the Daily Bread store in Garfield. The shop, lined wall-to-wall with Mac heads, was open for the weekend only, and carried new clothing and merchandise.

After a private dinner with winners of a cross-city scavenger hunt, Mac tweeted at 8:30 p.m. that he’d be performing a few songs for free to the 21-and-older crowd at 242 51st Street. The message led fans to the second floor of Spirit Lodge in Lawrenceville, where Mac heads, album artwork and Pittsburgh cutouts covered the room.

“I’m going to do a really intimate, nice performance here of some songs,” Mac said when he took the stage promptly at 10 p.m. “My parents are here. Shout out to my parents.”

In front of his parents and a small crowd of about 250 lucky fans, Mac played nearly all of the songs from the new album, on a stage smaller than the Rex Theater’s. The personal, surprise performance was a contrast to Sunday night’s sold-out show at Stage AE, which was in front of more than 5,000 people.

As he cycled through songs that had never been performed before, he jumped around the stage, joked with his disc-jockey and grabbed champagne bottles from the audience.

But he certainly wasn’t hungover Saturday, as the rap star was in full athlete mode for softball on Arsenal Fields. His REMember squad played the winner of an eight-team tournament.

He must have taken lessons from his first pitch at the Buccos game, because on the mound, he was lights out. As opposing batters stepped into the box, Mac – a gifted trash-talker – barked tasteful insults with a cigarette hanging from his mouth.

And when the teams had played through the standard seven innings, he wanted to play a full nine. It was as if he was “one of the guys” in a beer softball league; the Warner Bros. phenom was truly having fun.

The fun continued that night, when he performed a few songs again at Altar Bar in the Strip District. Seven of his label performers also played for free.

He ended the weekend at Heinz Field on Sunday with a terrible towel in his hand, pumping the crowd up before the Steelers’ game against the 49ers. Then, it was off to Stage AE for the grand finale.

Throughout the weekend, Mac didn’t look like a superstar. He wasn’t followed by a posse of bodyguards, and he didn’t turn down any requests for photos or autographs. It’s rare to see a celebrity cherish the opportunity to reconnect with fans from his hometown.

By Jacob Guerra | The Duquesne Duke

“This is my favorite sentence to say: Pittsburgh, what the f— is good?” Mac Miller yelled with his raspy voice, later admitting that he’d been screaming at the Steelers game that same day. He’d just taken off his Taylor Allderdice graduation gown, which he’d worn onstage as a shout out to his old Pittsburgh high school and as a symbol of how far he’s come since graduation.

Though Mac’s graduation was long before his show at Stage AE on Sunday, he’d only recently graduated to the big leagues of the rap game with his major label debut, “GO:OD AM,” on Friday. The album’s release was followed by an event-filled weekend in Pittsburgh, including two free shows on Friday and Saturday, numerous meet-and-greets at his pop-up shop in the Daily Bread store in Garfield and finally the show at Stage AE to kick off his tour.

Joined onstage by TreeJ, CLOCKWORKDJ and an impressive light show, Mac started his AE set with songs “Loud,” “Watching Movies” and “Insomniak”—each fan favorites from his three previous projects. The songs acted as an open acknowledgement of the past, much like the gown he wore at the beginning of the set. He embraced the tracks just as he embraced Pittsburgh in the days leading up to the show.

But just as he shed his gown, he shed his moment from the past. After throwing out copies of his new album, he switched to new material, bumping “Doors,” “Brand Name” and “100 Grandkids” consecutively off of “GO:OD AM.”

Regardless of the album’s recent release date, much of the crowd shouted the new lyrics with enthusiasm. This was reassurance that not everyone was there just to hear the old hits.

The people that were there for the hits, though, were not out of luck; Mac made sure to sprinkle in a couple of classics between the new stuff, including “Nikes On My Feet” and “Donald Trump.”

In between songs, and after a fair amount of drinking and performing, Mac was sentimental yet serious about his city.

Mac’s sign of affection got the crowd hyped up again—at least for the next song or two. At points, the crowd didn’t seem as excited over the show as he did. Perhaps they were sad to see him leave for tour after having him around all weekend.

But after all of the unforgettable events and his grand finale show, who wouldn’t be sad to see Mac leave home? Stage AE was just the cherry on top of the sundae he gave to Pittsburgh in honor of his rap graduation.

This weekend he proved to his city that even if he eventually wears a gown made of gold, it will still have the word “Allderdice” printed on its back. 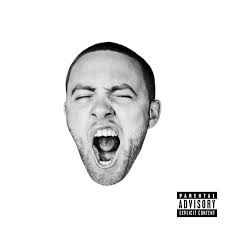 In the summer of 2014, Mac Miller was in his darkest hour.

The young Pittsburgh-born rapper was living in Los Angeles, battling a drug addiction and spending most days alone. He found solace in recording music, and produced nine albums worth of songs.

The album is a bold, impeccably-produced “good morning” to real fans of hip-hop; the same fans that used to denounce Mac as a fratty-backpack rapper. “GO:OD AM” is Mac’s most mature album yet, and one of the best of the year.

The opening track, “Doors,” produced by Tyler, The Creator, sets the tone for the album with a polished mix of soulful R&B and hip-hop. Then, after three beeps of an alarm clock and a cheerful “Good morning, baby,” it’s straight to the best song on the LP, “Brand Name,” which touts Mac’s improved flow over a groovy guitar and piano beat. It’s the type of song that hip-hop fanatics have been waiting to hear from Mac for years.

“PA’s baby/ I ain’t been to PA lately/ See, I’m laughin’, they call me shady/ I’m a white rapper, they always call me shady,” he raps, alluding to his rise to fame and comparisons to Eminem.

The themes of fame, money and maturity were expected from the Taylor Allderdice graduate, who signed to Warner Bros. Records in October. The signing was especially surprising because Mac had become a bona fide success story independently. But he wanted to try something new, and take his career in a new direction.

“GO:OD AM” changes direction with “Weekend,” featuring a minimalist beat of only synthesizer chords and a soulful outro by pop star Miguel.

In addition to Miguel, Mac also locked down features from Chicago drill rapper Chief Keef (“Cut the Check”) and internet cult icon Lil B (“Time Flies”) on the album, showcasing his growing notoriety in the hip-hop community.

The LP has an excellent mix of psychedelic tunes and hard bangers; “ROS,” a soft ballad, is sandwiched between “When in Rome” and “Break the Law,” laden with trap influences.

Mac’s influences are also clear in “Rush Hour” and “Two Matches,” which are straight from the mind of Odd Future, the rap collective he spent time with in Los Angeles.

But he’s in Los Angeles no more. He moved to New York City in August to start fresh. In “Jump,” he asks, “I wonder if I jump/ Do you think that I can fly?”

“GO:OD AM” is a huge jump for Mac, but there’s no doubt he’s flying high.

February 15, 2018 The Duquesne Duke News Comments Off on New fellowship created in the spirit of August Wilson

Sairah Aslam | Staff Writer 02/15/18 Duquesne University is honoring one of the Hill District’s enduring legacies, August Wilson. The university announced it will be creating a new August Wilson House Fellowship, bolstering the university’s […]

November 15, 2018 The Duquesne Duke Arts & Entertainment Comments Off on Masquers shine where writing fails in Dames at Sea

Claire Neiberg | Staff Writer 11/15/18 The Duquesne University Red Masquers continued its fall season with the opening of Dames at Sea last week on Nov. 8. Dames at Sea is an hour-and-45-minute-long musical written […]

By Grant Stoner | Staff Writer With over a dozen general video game genres, comparisons are bound to occur. Action franchise “Devil May Cry” is often likened to the button-mashing, quick-timed-event filled “God of War.” […]