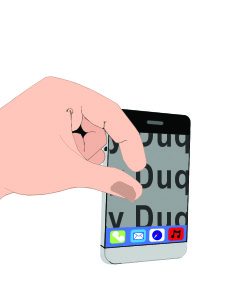 Last week, Apple’s iPhone had its seventh birthday, the date marks Steve Jobs’ unveiling of the technology on Jan. 9, 2007. With somewhat modest hopes of a one percent market share of the world’s cellphone market in the beginning, the iPhone now dominates an impressive 12.9 percent of that market in 2014, according to The Huffington Post article “Happy Birthday iPhone! Here are seven things I killed.”

The iPhone deserves more than a market share report on its birthday. Not only has the device swept cell phone users off their feet in terms of preference over other devices, but it has completely revolutionized the idea of what the cell phone should and can be.

The iPhone has challenged itself and other cellphone manufacturers to make not just phones, but highly multi-tasking and comprehensive devices. It has also fully eliminated the need for several classic tools, posing itself as an all-in-one reference and communication device, making advanced technology a part of simple tasks of everyday life. This has its benefits and downsides.

When cellphones first became popular, they were mere devices for on-the-go phone calls.. Fastforward to the mid-2000s, they at least became sleeker, adding a few new functions like cameras and text messaging. When Apple introduced the iPhone’s interface, other companies followed the design quite similarly, attempting to mirror the sexiness of the touch screen.

Despite its gorgeous appearance, the iPhone has now become a deadly force for classic means of communication and even simple reference. The Huffington Post did an article on some things that the iPhone killed, but here are a few others the device has made almost completely obsolete:

Why have a chunky device suction-cupped to your windshield when you can just set your iPhone on the console and have it direct you in the same manner? Google Maps is a free application that can be downloaded to the iPhone. Other than the pain of an extra device, Apple’s inclusion of a good GPS and Google Maps system saves the traveler money. Even though GPS technology isn’t brand new, a system for cars costs somewhere from $80 to $180.

It sounds ridiculous, but if someone gave me a cellphone that had buttons that I needed to press, I would be momentarily confused. With some cellphone manufacturers sticking with a blend of hard buttons and touch screen, Apple has made everything accessible with a light touch of the fingertip. Not only is the touchscreen easy to use, but it is highly customizable.

Apple took customization to the next level—surpassing trivial customized backgrounds or themes and allowing a user to actually rearrange buttons on multiple screens.

Parents, cops, rejoice! Kids can too, because this could be a persuasive point in your pitch for your parents to buy you that newest iPhone model. SIRI is one of the most distinctive qualities of the iPhone in comparison to other smartphones. With its help, it is possible to ask it to do things on the iPhone for you without even looking at the screen or pressing on the phone more than once. SIRI can contact your friends and even engage navigation through the command of your voice.

I absolutely love having one device that efficiently performs so many different tasks for me. The fact that it has nixed my need for phone books, GPS systems, alarm clocks and roadmaps has made life much less extraneous. The minimization is much appreciated. On the other hand, there are a few things I’ve noticed about the all-inclusive iPhone that have some potentially negative consequences. There are some non-physical issues that could become a problem in the future.

There looms the matter of too much dependence. When I make important notes or schedule changes in my iPhone, the consequences of leaving it home for the day seem catastrophic. Further, no GPS means no back-up device to get out of a rut if you’re lost. The biggest problem that I’ve run into is a malfunction in my alarm clock app, where I’ve considered buying an actual alarm clock rather than using the one included in my Apple device.

Looking beyond the individual experience, more and more often I see young children with iPhones; not just young teenagers, but single-digit aged kids. This is the first generation of children that are growing up close to truly advanced and multi-dimensional technological devices. Many of them use an iPhone not for calling or texting friends, but for games.

This seems harmless, but it also takes some of the healthy physicality out of playing. Without dolls, building blocks, strategic games, face-to-face interaction and physical touching, there could be a problem in the way the next generation interacts with other people. Of course, this is something we will have to wait years to really see unfold so it can be studied.

September 12, 2013 The Duquesne Duke Opinions Comments Off on Smart watches become the next big thing

By Kristen Kuron | Student Columnist Take a moment to think when was the last time you wore a wrist watch? I remember the last time I grabbed mine was during my LSAT exam. I […]

By Duke Staff On New Year’s Eve, many Americans had their eyes fixed on Times Square to see the ball drop in New York. As 2013 slipped into 2014, the country shifted its focus west […]

By Rebekah Devorak | Opinions Editor  In an era when the iPhone is commonly used for boosting confidence and perfecting other’s perceptions of ourselves through carefully chosen Instagram themes, Apple is instead choosing to use […]