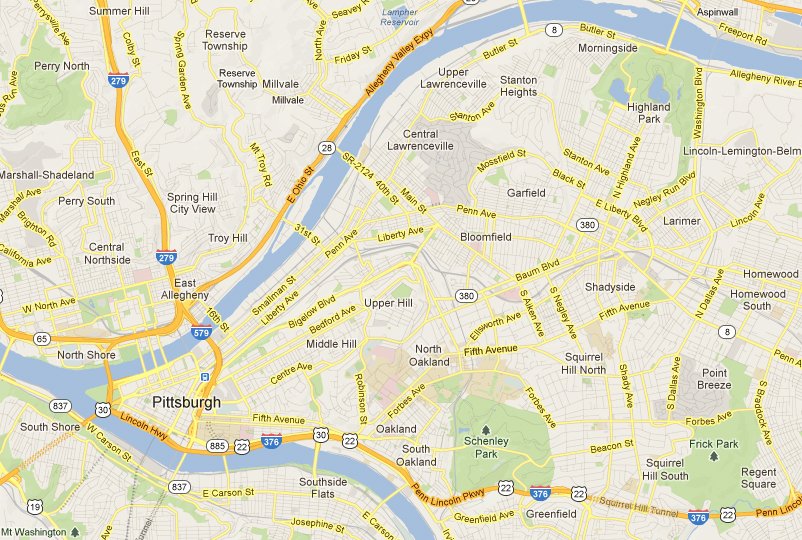 With the semester nearly over, graduation rapidly approaching and the weather finally warming up, now’s the perfect time to step outside and take in all that Pittsburgh has to offer. Take an afternoon to check out the city’s staples or get off the beaten path and visit some of Pittsburgh’s hidden gems. Use the map above to check out some of the city’s lesser-known attractions. Watch videos, view some photos or just hear audio about what there is to do at particular locations all over Pittsburgh.

If nighttime fun is more of your scene, then Arsenal Lanes is right up your alley.  Located on Butler Street in Pittsburgh’s Lawrenceville neighborhood, Arsenal Lanes is the place to go with a group for a night of fun. With specials every night of the week, live bands, 22 lanes for bowling fun and a full bar, everyone is sure to have a good time. Beware though, only those 21 and over are allowed to enter after 9 p.m.

Maybe your idea of exploring includes getting lost in the park for a while. The four parks – Schenley, Highland, Frick and Riverview, all have exquisite running and biking paths and many activities for residents of all ages. Individual parks feature unique attributes that can’t be found in other parts of the city. For more info, visit pittsburghparks.org.

If you been in Pittsburgh for even five minutes, I’m sure you already know how much the city loves its sports teams. Consol Energy Center, the newest addition to Pittsburgh Sports Venues is home to the Pittsburgh Penguins. Attending sports events can be a little pricey for students, but the Pens offer student rush tickets for $25 to select games on game day. For more information, visit ticketmaster.com/pensrush.

The Pittsburgh Pirates may not have had a winning record in the past two decades, but PNC Park is surely a sight to see. PNC Park, home of the Pirates, one of the oldest Major League Baseball team, is the most inexpensive place for students to go to take in a major league game. For as little as $12, you can purchase tickets directly from the Pirates or you can take your chances for a lower price on Stub Hub. For more information, to check on the Pirates’ home schedule or see the schedule of promotional nights at PNC Park, visit pirates.mlb.com.

Pittsburgh may love all of its sports, but football is by far the favorite. Pittsburgh is home to the six-time Super Bowl champion Pittsburgh Steelers. Heinz Field, located on the North Shore, is definitely a spot to visit for visitors and Burghers alike. Tours of the stadium are available between April and November, even as the season kicks off in early September. On Saturday, April 27, Heinz Field will host the 2013 Steelers Fan Blitz from 11 a.m. to 5 p.m. The event will include ticket giveaways, autograph sessions and skills sessions for fans. Tickets are now on sale at area malls. For more information, visit steelers.com.

Love Pittsburgh but need an escape? Check out the 29 Nationality Rooms at the Cathedral of Learning. Each room is decorated and furnished with culturally authentic items giving each a unique look and identity to match its story. Visitors can take guided or audio tours of the rooms 360 days a year.

If you’re looking to do a little more exploring while in Oakland, check out the home of the Nationality Rooms. The Cathedral of Learning is the tallest educational building in the Western Hemisphere, standing at 42 stories and 535 feet tall. For more information on tours and visits, call (412) 624-6000.

Maybe you prefer to fly with a flock to hanging out with the masses. The National Aviary, located in the North Side, is the perfect place to spend the day with the birds. With more than 600 birds from more than 200 of the world’s species, one bird is bound to ruffle your feathers. Take a walk through the rainforest, the grasslands or the Everglades and get beak-to-nose with the birds. The Aviary can be reached by car, bus or train, if you don’t mind a little walking, and is open daily from 10 a.m. to 5 p.m. For more information, visit aviary.org or call (412) 323-7235.

Who doesn’t like to take a walk on the wild side? The Pittsburgh Zoo and PPG Aquarium is a great escape for everyone’s inner child. With thousands of animals from more than 400 species, including 22 threatened or endangered species, the Pittsburgh Zoo allows visitors to travel the world without ever leaving the city. Hang out with the giraffes, watch the tigers prowl or take a trip under the sea with the fish all in 77 acres. The zoo is open year-round, with longer hours beginning in April each year. For more information, visit Pittsburghzoo.com or call (412) 665-3640.

If you want to head out for a few drinks but want a change of scenery from the South Side, check out the Church Brew Works in Lawrenceville. Located on Liberty Avenue right near Sullivan Field, the Church Brew Works calls the restored former St. John the Baptist Church home. Some remnants from its holy days still remain, like the confessional, pipe organ, pew seating and the altar. Beers are brewed on-site and both the beer and food menus are incredibly diverse. The Church Brew Works can be reached by walking downtown to Smithfield and Sixth and picking up the 87 bus to Lawrenceville. For more information, visit churchbrew.com

If you prefer science to history, art, books or flowers, you’re in luck. The Carnegie Science Center, located on Pittsburgh’s North Shore is home to the Buhl Planetarium, the Highmark SportsWorks center, the U.S.S. Requin, the Rangos Omnimax Theater and the Miniature Railroad & Village. In addition to these well-known staples, the Science Center also features exhibits such as SeaScape, Roboworld, the world’s largest permanent robotics exhibit, Body Tech, Exploration Station and SpacePlace, a walk-in replica of the International Space Station.  Spend an afternoon taking in a show, bouncing around in the SportsWorks center or just go and have a conversation with (I can’t remember the name of the robot, but will look ASAP). For more information, visit carnegiesciencecenter.org.

For a different type of adventure, head in to the Phipps Conservatory, Pittsburgh’s unique glass and steel greenhouse at the entrance to Schenley Park. Built in 1893, Phipps is home to many flowers, plants and trees in its 14 indoor gardens and six outdoor gardens. It contains formal gardens and exotic plants and flowers in its rotating exhibits. Phipps is open seven days a week. For more information, visit Phipps.conservatory.org.

The Carnegie Library, founded by Andrew Carnegie in the 19th Century, houses its home branch, the largest of its 17 branches in Oakland.  The library system is home to a collection of 5,324,638 items as of 2011.  That same year, it saw 2,272,361 visitors and its total circulation was 3,433,162. No matter where you live in the city, there’s a branch near you. While Duquesne houses its own library materials in both Gumberg and the Law Library, the Carnegie Library’s collection and variety of branches can offer a sanctuary off-campus for students to study, write, work or just read for a while with no distractions. For more information, visit clpgh.org.

If you enjoy the finer things in life, take a walk through the Strip District on a Saturday or Sunday morning. On a weekend morning, the Strip becomes a lively open-air market with some of the most exquisite fruits, vegetables, flowers and goods under the sun. The Strip is known for its restaurants, markets and specialized stores. To fully take in all that the Strip is, set aside a morning and afternoon to spend wandering the streets.  For information on the regular fixtures in the Strip and other goings on, check out Pop City’s guide to the Strip online.

If you’re a lover of modern art, head on over to the North Side and check out the Andy Warhol Museum. Browsing through a collection of Warhol’s life’s work and his famed time capsules is a great way to spend a few hours. If you’re more of a night owl, the Warhol hosts “Good Fridays” every Friday. Admission is half price, there’s a cash bar and entertainment, and the museum stays open until 10 p.m. Duquesne has partnered with the Carnegie Museums to offer free admission for students of certain schools. The Warhol also offers workshops and screen printing classes throughout the year. For more information, visit Warhol.org.

The downside of Downtown Pittsburgh is the lack of concentrated shopping. Sure, there are a few stores in the South Side Works and smaller boutiques scattered throughout the city. Walk down Walnut Street in Shadyside and you’ll find just what you’re looking for.  With Apple, Banana Republic, Chicos, Gap, J. Crew, American Apparel, Coach, White House Black Market, Victoria’s Secret, Sephora and more, Shadyside offers an escape for those shopaholics without a way to South Hills Village or the Ross Park Mall. Grab a couple friends and pick up one of the 71 buses for a day of shopping without ever leaving the city. Don’t forget to stop at any of the restaurants in the area for a pleasant treat, because, by now, you have to be tired of Towers’ food.

Pittsburgh sure has its share of unique hideouts and historical places, but the Carnegie Museums of Art and Natural History definitely top the list. The Carnegie Museum of Art is home to works of art from all over the world and from all periods. Take in all kinds of paintings, photographs and sculptures from contemporary and past artists. While you’re there, don’t forget to check out the Hall of Architecture, part of the Heinz Architectural Center, one of the three largest architecture exhibits in the world.

Head across the museum and take in the Natural History Museum side while you’re there. With its halls of birds and mammals, dinosaur exhibits and archaeological center, you’re bound to learn something new.  Current exhibits include Population Impact, which explores the effects a growing population is having on the planet, and Garden of Light, a feature of fine jewelry pieces designed by Paula Crevoshay. Don’t forget to say hi to Jane the Tyrannosaurs Rex before you go! For more information on the museums, visit cmoa.org and carnegiemnh.org.

September 6, 2018 The Duquesne Duke Sports Comments Off on NFL kicks off this weekend with no clear favorite on horizon

Jacob Hebda | Staff Writer Sept. 6, 2018 The NFL, set to begin Thurs., Sept. 6, features bountiful storylines both on and off the field. Ahead of Thurs., Sept. 6’s opener in Philadelphia, staff writer […]

Concert venues to visit in Pittsburgh

August 20, 2014 The Duquesne Duke Arts & Entertainment Comments Off on Concert venues to visit in Pittsburgh

By: Sam Fatula | a&e editor As Duquesne welcomes in another new year of classes, it also introduces the lanyard leashed freshmen that have matriculated to the University. They come carrying boxes of microwavable food, […]